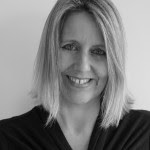 photo by kind permission of the author

One Step Too Far


Tina, it's a real pleasure to welcome you to Jaffareadstoo, we are delighted that you have visited us to talk about your novel ~ One Step Too Far

Where did you get the inspiration for One Step Too Far?

It came to me out of the blue, when I was on holiday in Venice.  I literally got the idea for the twist and thought, that would make a great book.  When I got home I started writing it down on my laptop.

What was the writing process like, and how long did it take you to write the first draft ?

It was very organic - I had a few vague ideas of what would happen, for example I knew Emily would run away and of course I knew why, but the rest seemed to write itself.  It was a very strange time for me, as my mother was becoming unwell, so I'd send her chapters to try to keep her going, and as I was working during the day I mostly wrote at night, either in front of the telly or propped up in bed.

Did you base any of your characters on people you know?

Hmm, there are certainly aspects of people I knew, especially in the more peripheral characters, and Emily's husband is sort of my husband, and the philandering father is a mix of quite a few people I've worked with, and some of Caroline's less attractive traits are exaggerations of my own past bad behaviour.  But no, there is no-one that is entirely based on someone I know.

No.  These days I do all my "work" at my Mac, which is on a shelf in our dining room, but I do my writing using an ipad and wireless keyboard and I take that wherever I fancy, usually following the sun (when we get it) around the house.  When I'm in full flow I write wherever I am, whether it's in the garden, on the bus, waiting for doctor's appointments, that kind of thing.

My great love as a teenager was Agatha Christie, for her plot twists, and then I got into massive page-turners like Jackie Collins and Jilly Cooper.  But my favourite books are some of the classics - anything beautifully written mainly.  I hugely admire Shakespeare, some of Keats, Thomas Hardy and Salman Rushdie.

And finally for fun:

If you could pick a musical soundtrack to accompany a film version of One Step Too far, what would you choose and why?

Well there is a song by Dido of the same name, but I must confess I've never listened to it.  One of my most memorable musical moments was taking the train from Liverpool to London, looking out the window at the backs of houses and snippets of other people's lives listening to U2's The Unforgettable Fire.  So I think it would be that.

The Hunger Games, my notebook and Black Swan Green by David Mitchell

http://tinaseskis.com/
Amazon
My review of One Step Too Far

Tina, thank you so much for giving such insightful answers to our questions and for taking
the time  to chat about One Step Too Far

Jaffa and I wish you continued success in your writing career