Who was Edmond J. Safra? “The greatest banker of his generation,” in the estimation of a former World Bank President. The founder of four massive financial institutions on three continents, and a proud child of Beirut’s Jewish quarter. An innovative avatar of financial globalization, and a faithful heir to a tradition of old-world banking. The leading champion and protector of the Sephardic diaspora.
In A Banker’s Journey, financial journalist and historian Daniel Gross, who, like Safra, traces his heritage to Aleppo, Syria, reconstructs the public life of an intensely private man. With exclusive access to Safra’s personal archives, Gross tracks the banker’s remarkable journey from Beirut to Milan, São Paulo, Geneva, and New York—to the pinnacle of global finance.
Edmond Safra was fifteen in 1947, when his father sent him to establish a presence in Milan, Italy. Fluent in six languages, and with an eye for value, managing risk, and personal potential, Safra was in perpetual motion until his tragic death in 1999. The modern, global financial empire he built was based on timeless principles: a banker must protect his depositors and avoid excessive leverage and risk. In an age of busts and bailouts, Safra posted remarkable returns while rarely suffering a credit loss.
From a young age, Safra assumed the mantle of leadership in the Syrian-Lebanese Jewish community, providing personal aid, supporting the communities that formed in exile, and championing Sephardic religious and educational efforts in Israel and around the world.
Edmond J. Safra’s life of achievement in the twentieth century offers enduring lessons for those seeking to make their way in the twenty-first century. He inspired generations to make the world a better place.
📖 My Review
I know nothing about the world of high finance, or banking, and I have to admit that, before picking up this biography, I hadn't heard of Edmond J. Safra but always keen to learn something new and read something out of my comfort zone, I settled down to learn more about how Edmond J. Safra built a global financial empire. Born in 1932, in Beirut, Safra's career spanned much of the tumultuous years of the twentieth century and is a fascinating account of survival, philanthropy and determination to succeed.
Comprehensively written, and with a fascinating selection of photographs, both personal and professional, we gradually get an idea of what maketh the man. It is obvious that the author has done extensive research into how Safra made a hugely successful global empire and used it for philanthropic good, helping those who were unable to help themselves. In using Safra's personal archives the author has been able to bring into focus the important achievements of this quite private individual who spent much of his time helping, and becoming, the leading champion, and protector, of the Sephardic diaspora.
As with all well written biographies there is much to consider and the author has been quite thorough in his descriptions of the business empire Safra created whilst at the same time revealing the personality of the man. A Banker’s Journey is an interesting account of Safra’s life and times especially as we trace his journey from Beirut, Milan, São Paulo, Geneva, and New York and beyond to the height of his success as, perhaps, the 'greatest banker of his generation'.
About the Author
Daniel Gross is one of the most widely read writers on finance, economics and business history. Over the past three decades, he has reported from more than thirty countries, covering everything from the dotcom boom to the global financial crisis and the great recession of 2008-2009.Gross worked as a reporter at the New Republic and Bloomberg News, wrote the 'Economic View' column in The New York Times, and served as Slate's 'Moneybox' columnist. At Newsweek where he was a columnist and correspondent he anchored seven cover stories. He is the best selling author of eight books.
Gross was educated at Cornell University and holds an MA in American History from Harvard University. His great- grandparents emigrated to the United States from Aleppo and Damascus.
Twitter @grossdm #ABankersJourney
@MidasPr
Website 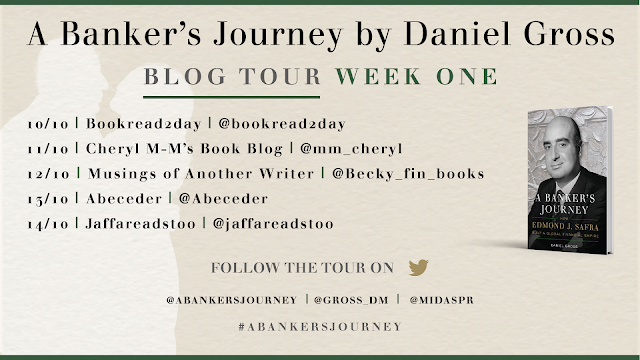