I'm really privileged to read latest release books which are so current they haven't even hit the book store shelves that I forget about the books which have influenced my reading over the years.
So, welcome to my Book Nostalgia feature where I'm allowing myself the luxury of going back in time with some of my favourite reads.
So, let's wallow in a book memory...
Rosemary's Baby
Ira Levin
Rosemary Woodhouse and her struggling actor-husband Guy move into the Bramford, an old New York City apartment building with an onimous reputation and only elderly residents. Neighbours Roman and Minnie Castavet soon come nosing around to welcome them and, despite Rosemary's reservations about their eccentricity and the weird noises she keeps hearing, her husband starts spending time with them. Shortly after Guy lands a plum Broadway role, Rosemary becomes pregnant and the Castavets start taking a special interest in her welfare.
As the sickened Rosemary becomes increasingly isolated, she begins to suspect that the Castavet's circle is not what it seems.
📖 My thoughts..
Just the thought of Rosemary's Baby brings me out in a cold shiver and even though I was too young to read the book when it was first published in 1967, I became aware of the story in the early seventies when, aged about fifteen, I was inadvertently allowed into the cinema to watch it. I say inadvertently because my group of friends and I had been at the cinema to watch Paint Your Wagon, an entirely innocuous musical starring Lee Marvin but on this particular evening the soundtrack to Paint Your Wagon had broken down so we were offered the opportunity to see Rosemary's Baby as an alternative.
We weren't legally old enough to to see this film as it had an 18 certificate, but hey, this was the seventies, so with no idea what the film was about and armed with a giant box of buttery popcorn, we settled into our flippy up seats to be soon terrified out of our wits by this devilish story of the occult. Considered to be one of the greatest horror movies of all time and with a haunting melody 'Rosemary's Lullaby', which on hearing makes me want to hide under a comfort blanket. I've never forgotten it and on the odd occasion when I've seen that the film is being shown on TV,  I have tried to watch it but can never get beyond seeing the cupboard in the hallway!
As an adult I have read Ira Levin's novel only once and found it as frightening as the movie and with my head filled with nightmare visions of an ethereal Mia Farrow standing close by a baby in a black bassinet I can still hear the soundtrack of the movie playing through the words. It's an imaginative story, certainly of its time, and rather dreary in places but so wonderfully scary that it still has the power to make the hairs on the back of my neck to stand up in frightened anticipation.
Maybe I'll be brave enough to read it again one day....😉
Best read with ...buttery popcorn and a snuggly blanket.. 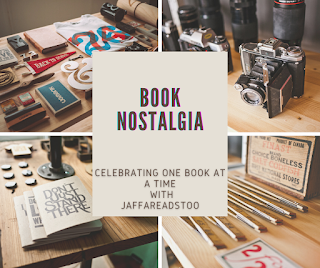