Janina Reston is a language expert, translating fiendishly tricky Arabic and Asian mathematical and scientific texts. Words are her world. But she can’t find any to share with her husband Owen. Instead, she confides in a spider named Gladys (who may or may not be her deceased grandmother). She lives in an ordinary city suburb where extraordinary things happen. Lily’s husband dies in a strange accident with a milk bottle, while Fatima writes biographies of unknown people living seemingly inconsequential lives, and Zosia – whose most daring adventure thus far has been replacing jelly and ice cream with lemon meringue pie – runs off to Delhi with an Asian Women’s Sewing Group.
Written with zest, zeal and humour, June Wentland’s debut novel was longlisted for the Blue Pencil First Novel Awards. It is a surreal journey through the avenues and alleyways of everyday life. But forget dull domesticity. This is a suburb where dense jungle leaves creep through the patio door when you’re putting the kettle on, where porcelain shepherdesses have evil intent, and where a seven-legged arachnid can be a wise companion for a woman at the end of her tether. June says, ‘It’s written for anyone who’s prepared to look at life in a different way, anyone who would like to pick up a book and see the world a little differently when they’ve finished reading it but experience humour, humanity and a shedding of their own worries for a while in the process.’
📖 My thoughts..
Foolish Heroines took me by surprise, in a good way. It isn't at all what I expected and even reading the blurb I wasn't sure whether the story would be a good fit for me but once I started to read and got into this author's sense of humour I found the story to be quirky and fun but with a deeper message.
Janina Reston is immersed in words, as a language expert translating Arabic and Asian mathematical and scientific texts, she is used the complexity of words but she seems to have a problem in communicating with her husband. Instead Janina confides in Gladys, a spider who lives in her bathroom, and who, Janina thinks, may, or may not be, her deceased grandmother. Ok, so once I got past this premise of confiding in spiders, I allowed myself to just let the words flow and that's when the story started to open up. What then follows is an interesting look at the lives of women, not just Janina, who are learning to re-evaluate their lives, and the often, unheard, complexities which make their lives difficult.
Foolish Heroines is a difficult book to describe as it's a bit like trying to remember one of those occasions when you wake up in the morning thinking, did I just dream that ! So, I won't spoil anything by relating the story except to say that it's surreal, quirky, imaginative and gloriously creative.
About the Author
June Wentland is an ordinary woman who believes that extraordinary things can happen if you keep your eyes peeled and your heart open to new possibilities. She grew up in Hull, moving to Manchester and Bristol before settling in Wiltshire. June has worked in community development and outreach for libraries as well as being a rather lacklustre waitress and on an assembly line sticking tassels onto lampshades. She has had stories televised and published by the BBC and her poetry has appeared in many literary journals and anthologies. This is her first novel.
News Alert ** The publishers, Valley Press have a Jan 2022 sale. Customers just need to enter code JAN22 when shopping on https://www.valleypressuk.com at the basket stage and the discount will be applied.
Twitter @june_mw #FoolishHeroines
Instagram @junewentland
Website
@valleypress
@kenyon_isabelle 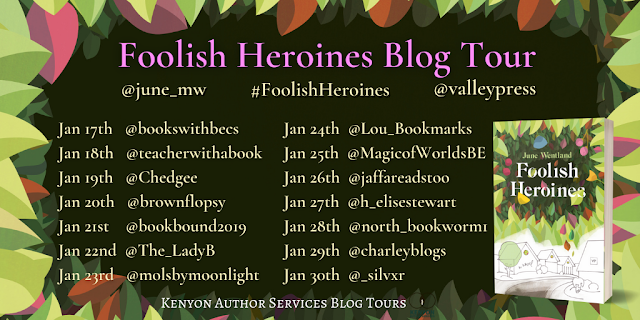