In the new Republic of Texas, open-carry gun ownership is mandatory, fundamentalist religion is the norm, violent motorcycle gangs terrorise the towns, the police are corrupted, and vigilantes guard the Wall that keeps people out and in. It is in this setting that Bluebonnet Andrews has grown up in the small town of Blessing with her alcoholic deputy father, her mother having fled the country just before Texas’ borders were closed to the rest of the world.
When a firearm accident kills Blue’s best friend, the Texas Rangers accuse her of murder. The penalty for murder is death, regardless of your age. Terrified, Blue goes on the run. In this journey away from the only home she has ever known, Blue joins up with a Latin American teenager named Jet, who is also on the run. Blue's vague plans of crossing the border and finding her mother are galvanized by Jet’s situation: the 16-year-old is pregnant. She needs to cross the Wall into America, where abortion is still legal. But is freedom of choice worth dying for?
Blue Running addresses issues of feminism, nationalism, women’s rights, racial injustice, immigration, and gun ownership, framed through the intimate tale of two young women from different backgrounds reacting to the system. Underlying these surface issues are their own personal struggles: histories of abandonment, abuse, sexual assault, racism, and individual agency.
📖 My Thoughts..
Fourteen year old Bluebonnet Andrews lives in Blessing in the newly formed Republic of Texas, a place where gun carrying is mandatory but as Blue finds to her cost guns carry more of a threat than could ever have been anticipated. When a catastrophic accident leaves Blue's best friend dead, Blue goes on the run, not just to escape punishment in a place where justice is in short supply, but also to try and find her mother who left her when Blue was just a small child. Blue's journey is not without danger and she faces many problems along the way but is supported by her unlikely friendship with another girl who is also on the run for very different reasons.
Blue Running is a story about friendship, loyalty and about being brave in the face of adversity. It's also about resilience and tenacity and about doing what feels right regardless of the consequences. It is a disturbing look at a dystopian society where neither hope, or despair, is allowed to flourish, and with danger on every corner this emotional coming-of-age story takes us on a thrilling journey as our young protagonists try to keep one step ahead of the authorities who would do them great harm.
There are important issues to be considered in Blue Running and the author touches on a whole range of important subjects but does so with a keen eye for keeping the story on track without ever allowing the issue of gun carrying, racism, sexism and totalitarianism to be hidden, forgotten or glossed over.
About the Author 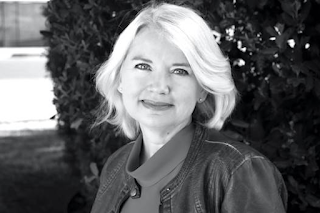 Lori Ann Stephens is an award-winning author whose American published novels include Novalee and the Spider Secret, Some Act of Vision, and Song of the Orange Moons. Her short stories have appeared in Glimmer Train Stories, and other literary presses. She is also the winner of The Chicago Tribune’s “Nelson Algren Awards.” A lifelong Texan, she’s seen the best and worst of her home state and has come to the conclusion that Texans are truly fabulous at heart. She teaches creative writing and critical reasoning at Southern Methodist University in Dallas.
From the Author
“Having grown up in Texas, I’ve experienced the threat of various freedoms, a fundamentalist past, and the paradox of living in “the Friendly State.” It is both terribly friendly and deeply terrifying. In creating Blue Andrews, I wanted to peel back the layers of my own childhood, rife with hope and the naïve perceptions of right and wrong and justice. Of course, Blue is a product of a patriarchal and racist system, but she’s also sceptical and curious—always watching and listening and figuring out her world. Beyond our state borders, I’ve also seen my world become more xenophobic and less compassionate, and this is my response. I don’t know that it’s an activist or political response, but this girl certainly must face her own demons as well as the demons that far-right politics have unleashed. At heart, it’s a tale of humanity.”
“I began writing the novel in 2018, after I started mentally collecting snippets of heated conversations about gun rights. Usually it was the Second Amendment defenders who were worked up to a heightened state of pathos, which is much more common now than the stoic Texan of the past. I straddle two worlds – the world of my gun-toting brother who lives in the countryside and encounters rattlesnakes and wild boars on a regular basis, and the world of my university colleagues who live in the city and overwhelmingly support stronger gun control laws.”
Twitter @lorifromtexas #BlueRunning
@MoonflowerBooks
@midasPR 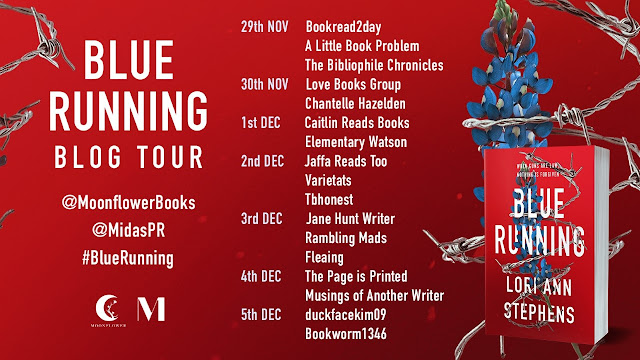