Delighted to take part in this Blog Tour on Publication Day

Some games can be deadly. At first, Detective Chief Superintendent Frankie Sheehan believes the murder mystery game sent to her office is a birthday gift from one of her colleagues. But when Frankie studies the game's contents, she notices a striking resemblance between the 'murder victim' and missing twenty-twoyear-old Lydia Callin. As Frankie and her team investigate, a series of grisly crimes connected to the game are discovered across Dublin city and Lydia's involvement with a shadowy network of murder mystery players becomes clear. On the hunt for Lydia's murderer, Frankie is drawn more deeply into the game. Every successful move brings her closer to the killer. But the real question is not what happens should she lose – but what happens if she wins.
📖 My thoughts..
When a cleverly put together Murder Box game is delivered to the police incident room at the Irish Gardaí’s Bureau for Serious Crime, Detective Chief Superintendent Frankie Sheehan is under the impression that it is a gift for her birthday. Baffled by a real life investigation into the disappearance of a local celebrity, which doesn't appear to be leading anywhere, Frankie is eager for distraction but when a young woman is reported missing, suddenly the contents of the Murder Box take on a rather sinister meaning.
I thought the idea of the Murder Box was an intriguing way to open the story and pretty soon Frankie and her team find that this sinister box offers much more than they could ever have imagined. Before long, it's a race against time to discover more about those who are involved in this dangerous murder game before something happens and another person disappears from the city of Dublin.
I've met DCS Frankie Sheehan before and I am always impressed with the way she throws herself into the investigation, often putting herself, and her team, in grave danger, but as always, her grit and tenacity to get the case solved is to her credit. Frankie's relationship with her police partner, Baz Harwood, is an interesting one, they each have each others backs and yet in The Murder Box, Baz seems to be preoccupied and isn't always on top form, so the different dynamic between them is interesting to observe.
This clever author has now given us four thrilling adventures in which Frankie Sheehan and her team get to solve some really challenging crimes and whilst The Murder Box can be read comfortably as a standalone, as with all series it's best if you follow from the start and enjoy this talented author's intricately plotted crime novels.
About the Author
Olivia Kiernan is an Irish writer living in the UK. She was born and raised in County Meath, near the famed heritage town of Kells and holds an MA in Creative Writing awarded by the University of Sussex.
Twitter @livkiernan #TheMurderBox
@quercusbooks @riverrunbooks 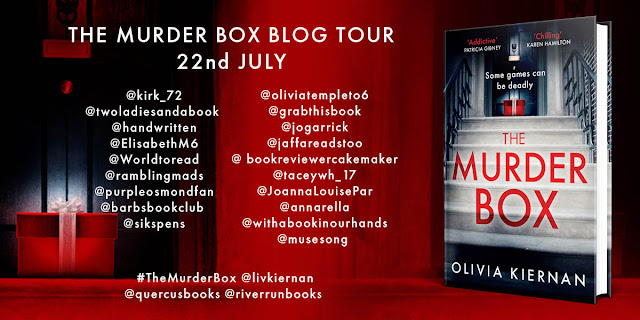