The London Guild was established in 1882 and provided garments for London orphanages. In 1914 the guild was renamed as Queen Mary's Needlework Guild which began to supply garments to the troops during WW1. The Guild continues today as The Queen Mother's Clothing Guild.

In 1914, Queen Mary encouraged women to make garments for the soldiers overseas from knitting socks and hats, to sweaters, belts and scarfs, every item was useful and greatly appreciated.

Lord Kitchener asked the Queen to get involved in providing 30,000 pairs of socks. Every magazine and yarn supplier entered into the spirit and soon women,men and children, across the land were knitting for the troops. The British Red Cross Society produced a pamphlet, Needlework and Knitting Instructions which sold for 6d.

Launched in 1911, the Women's Weekly magazine encouraged their readers to get involved and regularly printed knitting and sewing patterns which became known as soldiers and sailors comforts. However, wool became scarce and outgrown hand knitted items were frequently unpicked and remade into more serviceable items.


Even recuperating soldiers were encouraged to knit !

Of course, knitting for the troops wasn't just happening in the UK. Similar activities were taking place in the United States and overseas. 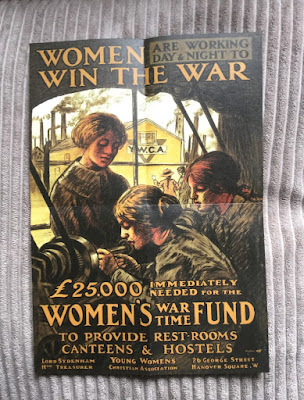