From the first Malt Laws in Scotland and the restriction on gin in Hogarth’s London to the bootleggers of the Second World War and the modern speakeasy, Ruth Ball charts our enduring relationship with illicit alcohol.

A former bartender and founder of the bespoke liqueur company, Alchemist Dreams, Ruth’s flair with spirits can be seen in the many recipes, both traditional and modern, that pepper the pages of Rebellious Spirits, inviting you to drink along as you discover the true taste of the past.

I absolutely love this book. Not just from the illicit booze perspective which fills the book with the most wonderful snippets of history, but also from the point of view of the alcoholic recipes, which even though some of the ingredients bring tears to your eyes, it wouldn't half be great fun to sample a few of the concoctions.

Divided into eight sections we travel from the days of monks and monasteries, with its recipes for spiced wine and Aqua Vitae, through to the great and the good of the twentieth and twenty-first centuries with the rise, and rise, of alcohol producers. I especially enjoyed chapter three, which is all about the Gin Craze and of the introduction of gin, during the reign of William of Orange in the early 18th Century, and of its association with highwaymen, outlaws and revolutionaries!

Rebellious Spirits is a great little book for anyone who loves the odd tipple and if they also enjoy historical detail, well, it's a winner, winner 😊

There was one place where you might get a better quality of gin – the only kind of gin shop that could stay in one place without too much fear of informers for long enough to develop a reputation for good gin: the Puss and Mew shop. There’s a wonderfully colourful tale in the biography The Life and Uncommon Adventures of Captain Dudley Bradstreet about how the shop was invented. Bradstreet was quite a character, and his biography is full of unlikely anecdotes. It’s about as likely that he actually invented the Puss and Mew shop in anything like the way that he describes as it is that he really turned back Bonnie Prince Charlie’s army single-handed. But since he tells such a good story, it’s much more fun to believe him than to call him a liar.

In 1736, after a spell as a government spy, Irish adventurer Captain Bradstreet arrived in London on the promise of an army commission. When the commission failed to appear, he was left in a strange city with only a few pounds to his name – but he was a resourceful man, and an educated one. He took a copy of the Gin Act and read it through. He found that for an informer to turn him in they had to know his name, and he also found that it was illegal, even for a magistrate, to break down his doors to find it out.

He had a friend rent a small house and lend him the keys so that not even the landlord would know his name. Then he bought a large picture of a cat. Why a cat? We will probably never know. Perhaps it just happened to be the first picture he found that was the right size for the window. He got his cat, and he nailed it up so that it covered his window. Then he cut a hole for its mouth and pushed a small pipe out under its paw, which he bent up to a funnel inside the house. He told a few local gossips that his magic cat would give gin to anyone who fed it pennies, and he shut himself up for business.

The first day was slow, alone with his magic cat; but soon he had so many visitors coming to feed that cat and call, ‘Puss, Puss, give me two pennyworth of gin’ that his neighbours had trouble getting in and out of their houses. It was at that point he decided that he was lonely, and invited a beautiful prostitute to assist him. The rest of his story is far too lurid for these pages, but he did keep up the business in good company for a few months – until imitators started cutting into his trade. Then he moved onto new and even more improbable schemes. As a result, all over town you could find the sign of the cat and call out ‘Puss!’ to be answered with a ‘Mew!’ and a glass of gin passed through a hole, poured through a pipe or delivered to you via a drawer. The magic cat had multiplied!

… Gin-sellers and their customers were typically not just poor, but also cold. In the days before central heating, keeping warm could be difficult, and so it was common to drink just about anything that could be heated hot. One of the favourite drinks was called ‘gin & hot’, a hot mixture of ale and gin. I’ve tried it out on a few willing victims and received a mixture of confused enjoyment and absolute dis-gust; I guess it must be an acquired taste. Usually the drinks were heated up by plunging a red-hot poker into the cup, which was easy and wonderfully dramatic, but did have a tendency to get ash in your drink.

Sharpening steel (or other suitable clean metal utensil; just be sure it doesn’t have a plastic handle)

Large mug (or suitably heat-resistant glass; an old-fashioned dimple glass with a handle is perfect)

Put the sharpening steel into a hot oven for 10–15 minutes until thoroughly heated. Put the gin and syrup into your mug, and then top up with the ale. Carefully take your hot steel out of the oven using an oven glove, making sure you have a good grip. Plunge your steel into the mug and stir.

Enjoy the dramatic sizzle as the iron plunges in and then sip your warm, foamy mug of gin & hot.

Ruth Ball is related to Admiral Edward Vernon, the man who invented grog as a way to serve the rum ration to the navy in 1740. She is a chemist and former bartender, and was the founder of Alchemist Dreams, a company dedicated to making handmade liqueurs blended to order for clients such as the British Library and the Science Museum Group. She is the author of Rough Spirits and High Society: The Culture of Drink (British Library, 2017). Having grown up in the Peak District, she now lives in London where she works at East London Liquor Company. 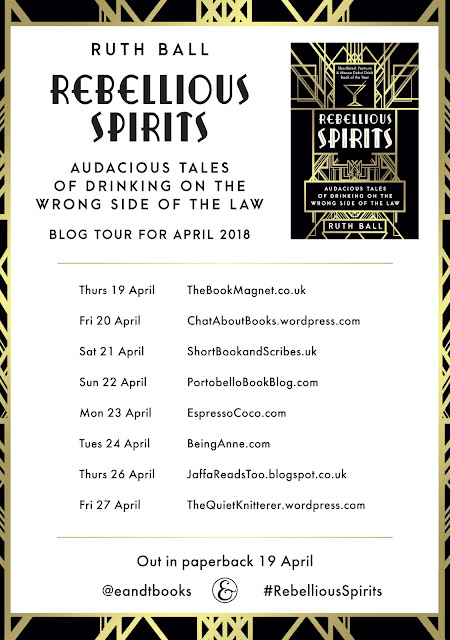