I am honoured to feature this very special family story from the author, Rachel Sargeant 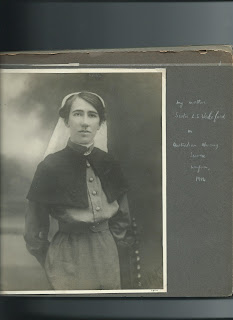 Australian-born Muriel Wakeford, trained as a nurse and became matron at two hospitals in New South Wales.  At the outbreak of war, she volunteered to serve in the Australian Army Nursing Service. She set off on the Kyarra in November 1914, arriving in Egypt the following January.
During her time as a war nurse, she kept a diary. Here is the first entry:

A momentous day indeed. At 4pm we pushed off from Circular quay amidst wild enthusiasm and also a terrific storm. The ferry boats all saluted, the crowd cheered and I felt pretty miserable. My first experience at sea. The night was wild indeed – three sea men were knocked over by the elements and one had to be operated on next morning. I was fortunate enough to be able to assist at the operation. Unique experience at sea.”

In April 1915 she was sent aboard the hospital ship Gascon bound for the island of Lemnos, thirty miles from the Dardanelles Straits. For the next few months, she and her colleagues cared for thousands of injured, dying and diseased men.

Bombardment of the Dardanelles commenced 5 am. Moved off at 1am. Reached Gaba Tepe at 5. Shells were bursting everywhere. At 9 the first lot of wounded came on board. At midday the place was a fiery inferno. The London was lying almost touching us. Shells from the enemy frequently burst quite close to us. The first landing party cut to pieces by the Turks who fired shrapnel before the lighters even touched the beach.

By daylight the whole coast presents a very different aspect to what it did when we departed here (Anzac) nearly a month ago. Troops have landed and are holding the whole length of coastline from Anzac beach to Cape Suvla (new landing place). Several cruisers and transports are anchored there in Suvla Bay. 3 cruisers and several monitors are shelling Turkish positions. Heavy fighting proceeds all day. Wounded arriving continually.”

In early September 1915 she travelled back to Australia on the Beltana, nursing invalided soldiers. She returned to sea on 17th December aboard the Karoola, presumably heading for the Western Front but we don’t have her diary for 1916 to confirm this.
Serving with Muriel on the Gascon had been third mate Raymond Sargeant, a British-Belgian man. They married in June 1916 in London.  As was the norm for the time, Muriel gave up her career when she married.

The couple made their home in Mombasa, Kenya where Raymond was Port Captain. They had one son, Harry, who became an army officer and saw action in the Second World War. Raymond and Muriel later moved to South Africa.

At the age of fifty six, Raymond returned to active service during the Second World War as a Lieutenant-Commander with the South African Naval Forces. Muriel and Raymond spent their retirement in Worthing, on the English south coast. Raymond died in 1958 and Muriel in 1965.

Muriel’s grandsons, Mark and Nigel, have kept her 1915 diary. Nigel’s wife, Rachel Sargeant, is a writer who has written a novel loosely based on the diary. Gallipoli: Year of Love and Duty. 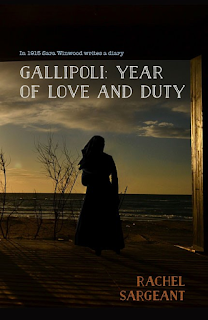 About Gallipoli: Year of Love and Duty

In 1915 Sara Winwood writes a diary. It begins as a grand adventure for Sara and best friend Bessie, two newly enlisted sisters in the Australian Army Nursing Service heading into the unknown to do their bit in a distant war.

At first they serve in Egypt where nursing duties slot in around camel rides to the Pyramids and coffee at Cairo’s Shepheard’s Hotel but then, together with four other nurses, they are sent on board the hospital ship Gascon, bound for the Dardanelles. Adventure turns to ordeal. The six women face an unrelenting barrage of blood, death and disease with only the fortitude and humour of their patients – shrapnel-filled men scraped off the hostile cliffs of the Gallipoli peninsula - to keep them going. They don’t just see war; they touch, taste and breathe it.

By the end of the year, one nurse will die, one will achieve greatness, one will mourn, two will deceive, and one will learn to love.

Rachel Sargeant is an Amazon Kindle Top Ten bestselling author. She grew up in Lincolnshire. She has three published novels, Gallipoli: Year of Love and Duty being her second. Her stories have appeared in My Weekly and the Accent Press Saucy Shorts series. Rachel has a degree in German and Librarianship from Aberystwyth University and a Masters in Creative Writing from Lancaster University. She spent several years living in Germany where she taught English and she now lives in Gloucester with her husband and children.

Warmest thanks to Rachel for spending time with us today

And for sharing Muriels's diary with us, I feel honoured to share this poignant reminder

of Gallipoli by a nurse who was actually there.