The Meal of Fortune Blog Tour

Failing celebrity agent Dermot Jack thinks his luck might have turned when a mysterious Russian oligarch hires him to represent his pop star daughter. Disaffected MI5 officer Anna Preston is just as happy to be handed the chance to resurrect her own career. Little do they know that their paths are about to cross again after seventeen years as they're thrown together in a desperate attempt to lure a notorious arms dealer into a highly unusual trap. Hard enough without having to deal with the lecherous celebrity chef trying to save his daytime TV career or the diminutive mafia enforcer who definitely has his own agenda. Then there's the very impatient loan shark who 'just wants his money back'. And Anna's bosses are hardly playing it straight either. But one thing's for sure. There'll be winners and losers when the Meal of Fortune finally stops spinning. Oh, and another thing, Anna and Dermot are absolutely not about to fall in love again. That's never going to happen, OK? 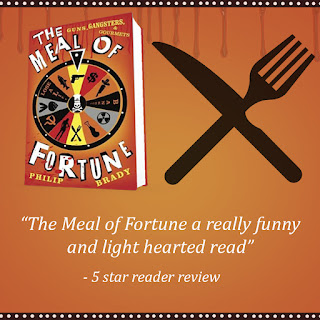 Take Dermot Jack, a celebrity agent down on his luck, add an MI5 special agent determined to make her mark, and mix together with a fabulously wealthy Russian oligarch and you have all the ingredients for a super slick crime thriller. That this crime thriller also has a quirky songstress, a  place at the Eurovision song contest and a touch of mafia involvement makes it all the more interesting.

Caught in the hectic confusion of Dermot Jack's life, his quest to turn the tide of his fortune means that against his better judgement he gets drawn into the murky world of shady deals, and the problem he has of trying to keep track of who wants to hunt him down is all part of the fun of this book. The author writes well and has a sharp eye for quirky detail which adds so much spirit to the story, I found that I was soon quite engrossed in all the dark dealings which are written about with such a lightness of touch that it's difficult to put the book down.

The Meal of Fortune took me on whirlwind of a journey, from the quirky to the serious and back again, there is certainly never a dull moment in this decidedly different comedy crime thriller.

I was first inspired to write when I read Lord of The Rings as a child. Back then the ambition was to create a whole fantasy world with dragons and sword fights. Sadly George RR Martin seems to have cornered that market, so I now try to comedy thrillers set in the (almost) real world instead. These feature spies, gangsters, vicious (if feckless) criminals, washed-up private detectives and daytime TV presenters. The Meal of Fortune is my first published novel. It is the first in a planned trilogy of comedy thrillers parodying society’s obsession with celebrity.

The follow-up, Tinker Tailor Solider Chef, sees the characters reunited in an attempt to foil a plot by the world’s most secretive intelligence agency (The Belgians) to bring the UK economy to its knees. The final book, centres on a referendum in Wales to decide whether the country should sell itself to an international technology giant for use as a conveniently located tax haven. It will be loosely based on the hilarious 80s film Local Hero.

My main rule in life is to never let tomato ketchup touch any food that is green. I am yet to work out any deep meaning behind this and suspect it is not the soundest of principles by which to live your life. But it’s better than quite a few I’ve come across down the years. Best not to get started on that one though.

Blog tour runs until the 10th March. Do visit the other stops. 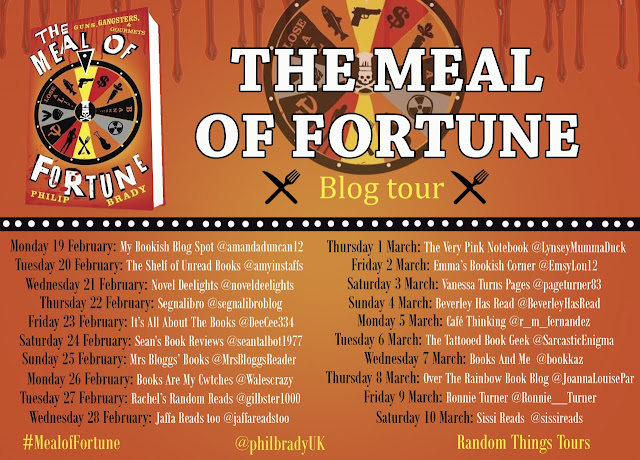