Childhood friends in the Sixties, Ivy and Abe were inseparable until a chance event tore them apart. Now in their early seventies, fate once again bring them together - both grey-haired, Ivy hand in hand with her grandson - to fill in the gaps of one another's lives. Each has experienced great passions as well as heart-breaking tragedies, but the time is finally right for them.

Their love story seems, in the end, meant to be. But what if…

In a parallel universe, chance had intervened and they'd met sooner?
They'd met in their forties, both married to other people and began an affair?
They'd met before then and married, but the daunting question mark over
Ivy's health had suffocated Abe's love for her?
As lovestruck teenagers, one small moment had sealed their fate?

I am delighted to welcome the author, Elizabeth Enfield to the blog 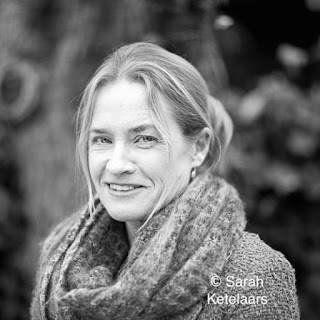 Hi Elizabeth, thank you for spending time with us today. Tell us a little about yourself and what got you started as an author?

I was working as a freelance journalist, with various ideas for novels, when I went into Sainsbury's and found that the book of the month was by Matt Rudd, a colleague who is now deputy editor of the Sunday Times magazine. I was so jealous I went home and moaned to my husband who pointed out that if I never got down to writing a book it would never be in Sainsbury's or anywhere else. Ivy is going to be. I'm so happy!

Where did you get the first flash of inspiration for Ivy and Abe?

I can't quite pinpoint the first flash as there were many. I hoard stories, things people have told me or that I've read. At some point I realized I had collected a lot of 'right person wrong time' accounts of people who had met and fallen for each other but whose relationships had floundered due to circumstances rather than lack of emotion. So, in Ivy and Abe, I decided to create a parallel series of worlds in which I might play with the idea 'is there a right person or just a right time?’

Ivy and Abe are always destined to meet but depending on the circumstances not always destined to be. There are other factors in their lives, over which they have no control, events which run through the novel that play out in different ways each time we meet them. Because the story is told across both their lifetimes, the reader discovers, not just how each alternate relationship pans out but what has happened throughout their lives.

When you started writing did you have a writing plan, or did you plot out the story as you went along?

I had a plan. It changed a lot. Right up to the very final edits. I threw in a whole new story line quite late in the day and reversed the chronology at the eleventh hour too!

No. I wish I did. My desk at home is in the middle of our living room, next to the piano, which my son likes to hammer away on. I can write when everyone is out but that's not that often so I tend to flit between the local library and various cafes. I live in Brighton, which is full of writers, tapping away over turmeric lattes - I'm a tea drinker. I've a favorite cafe, which has Wi-Fi, pots of Sussex breakfast tea and an atmosphere, which I find conducive to writing. I do my best thinking in the bath or walking on the Downs nearby.

Elizabeth Enfield worked as a journalist and producer for BBC radio before going freelance. She now contributes to various national newspapers and magazines. Hershort stories have been broadcast on Radio 4 and published in magazines including Woman's Own and the Sunday Express.


Huge thanks to Elizabeth for sharing her thoughts about Ivy and Abe.