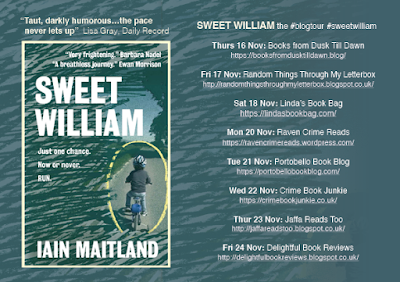 A father desperate to be with his young son escapes from a secure psychiatric hospital, knowing he has just one chance for the two of them to start a new life together. He plans to snatch the three-year-old – and run away to a new life in France … but first he must find the boy, who has been fostered by his murdered wife’s family, and stay clear of the police, already in pursuit. He will be utterly ruthless in pursuit of this outcome. But William is a diabetic who needs insulin to stay alive…

Cut through with dark humour, Sweet William is a story of mental illness, a foster family under pressure, and an aggrieved father separated from his precious child. As the fugitives are pursued through the back roads of East Anglia the story reaches its terrifying climax. The result is an incisive and deeply affecting literary thriller.

This is one of those difficult books to review without exposing anything of the story, as to give even the smallest hint of what's happening would be to spoil, what is, a very compelling and, it must said, decidedly dark thriller.

Being caught up in the life of this desperate father, who wants to spend time with his adored son, should on the surface work out well, however, the father in Sweet William isn't anything like your typical father. To say that he has been confined in a secure psychiatric unit for committing heinous crimes is enough to set your teeth on edge from the very start of the story, the opening of which, makes for compelling reading.

Sweet William moves along quickly in real time and the way in which this unique forty-eight hour time lapse evolves allows the story to have a scarily realistic edge. There is much to be aware of, both in terms of the capriciousness of a supremely flawed individual, and also, far beyond this unpredictability there are elements of the story which terrified me, not in a 'being afraid of the dark' sort of fearfulness, more in an escalating feeling of apprehension, which made me very uncomfortable, both in terms of the eventual outcome, and ultimately, for the safety of young, William.

Sweet William is a taut and tense psychological thriller. The author commands the narrative well and keeps the momentum from start to finish. The roller coaster of a journey he takes us on is highlighted by the vividly descriptive way he brings to life the difficulty and emotional impact of a family, and an individual, in absolute turmoil.

Iain Maitland is the acclaimed author of Dear Michael, Love Dad (Hodder, 2016), a moving book of letters written to his son, who suffered from depression and anorexia. Iain is an ambassador for Stem4, the teenage mental health charity, and has discussed mental health issues on The One Show. He lives in Felixstowe.