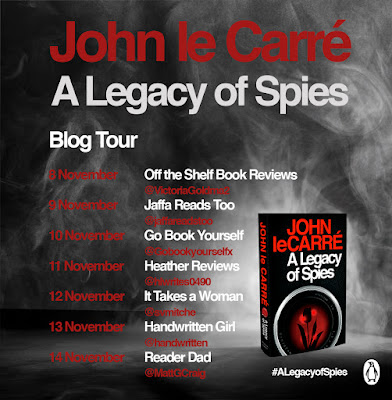 For the first time in over 30 years, John le Carré returns to the Cold War

in this thrilling masterpiece

Peter Guillam, staunch colleague and disciple of George Smiley of the British Secret Service, otherwise known as the Circus, has retired to his family farmstead on the south coast of Brittany when a letter from his old Service summons him to London. The reason? His Cold War past has come back to claim him. Intelligence operations that were once the toast of secret London are to be scrutinised by a generation with no memory of the Cold War. Somebody must be made to pay for innocent blood once spilt in the name of the greater good.

Interweaving past with present so that each may tell its own story, John le Carré has given us a novel of superb and enduring quality.

Legacy of Spies work well as a standalone story, however, those readers who have read a couple of its Smiley predecessors, The Spy Who Came In From the Cold and Tinker Tailor Soldier Spy will probably gain more from reading what is, in effect, a 'tieing up of loose ends' sort of story.

That John le Carré is the undisputed king of the espionage novel is without doubt and I enjoyed reading of the intricacies of the British Secret Service, which he brings to life so vividly, and of the ethical uncertainties and petty squabbles which linger in the shadows.The author's succinct turn of phrase, and the way his characters are allowed to quietly infiltrate the novel without any fuss, or of never quite knowing who is truthful or trustworthy, is all part of the espionage game, and the author does this ambiguity extremely well.

Although the story covers events from the past, there is also a very modern feel to the story, especially in the details of the 21st century spy headquarters and the way in which that operates, which is a far cry from the dim and distant days when George Smiley and his gang ruled the roost.

My feeling is that if you have read the series you will be happy with this book but it's perhaps not the place to start if you haven't read any of the stories before. The back story references need to be appreciated in order to understand just how clever is this conclusion.

John le Carré was born in 1931. His third novel, The Spy Who Came in from the Cold, secured him a worldwide reputation, which was consolidated by the acclaim for his trilogy Tinker Tailor Soldier Spy, The Honourable Schoolboy and Smiley's People. His recent novels include A Most Wanted Man, Our Kind of Traitor and A Delicate Truth. His only work of non-fiction, The Pigeon Tunnel, was a number one bestseller in 2016.