The Author in my Spotlight is ....Virginia Moffatt 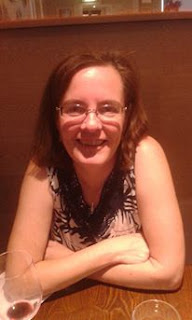 Hi Virginia, welcome to Jaffareadstoo and thank you for spending time with us to talk about your debut novel, Echo Hall on its Publication Day !!

Tell us a little about yourself and how you got started as an author?

I consider myself to be a community worker, having worked in a variety of roles across the public and nonprofit sectors, mainly in social care. I currently work in a support role in education.

My father was an English teacher so I was lucky enough to grow up in a house heaving with books. I think it was that, and the propensity of both my parents to tell stories, that inspired my twin sister (Julia Williams) and I to be writers.

It took me a long time to get going, because when I was young, I lacked confidence. The only writing course around was the University of East Anglia Masters degree but it didn’t even occur to me that it would be worth trying that route.

I wrote a few stories and three quarters of a novel in my early twenties, but abandoned them when work and other academic study took over. Then I met my husband and before I knew it, we had three children, I was nearly forty and I wasn’t anywhere near being a writer.

It took having a career break for me to make the decision to commit to being a writer. A couple of years later we moved to Oxford began a writing course. I haven’t looked back since.

Where did you get the first flash of inspiration for Echo Hall? 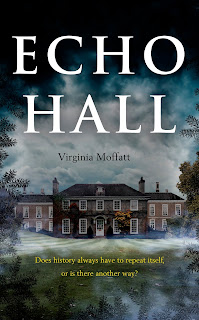 In 2003 Chris and I moved to a small village in Northamptonshire. It was a very spooky place and we lived in a creaky old school house near a graveyard. So I often used to imagine I could hear voices in the night. Of course, it was just my imagination, but it got me thinking, what if those voices were real, whose voices would they be, what would they be saying and why?


Will you explain to us a little more about the plot without giving too much away?

The novel tells the story of three different women, Ruth, Elsie and Rachel, who are all connected to the Flint family, the owners of Echo Hall a house on the borders of Wales. It begins with the newly married Ruth arriving at Echo Hall in 1990, to discover a place full of mysteries and unhappiness. Her search for the truth takes us back in time to meet Elsie in 1942, who is living with her unpleasant in-laws while her husband is away with the RAF. We then go further back to follow Rachel’s story from 1911 to 1924, discovering the source of the conflict which has damaged the family for so many years. Part four brings us back to Elsie and Part Five to Ruth, where the last secrets are finally exposed.

I hope the book is a gripping mystery and that readers will engage with the different characters and their dilemmas. But I’m also exploring a wider question of the impact of war on those who experience it, asking if conflict is inevitable or can we find another way?

When I first started we were squeezed into a tiny little flat and the children were so small, I barely had time to write. What little I did manage was from the computer in the dining room, but for most of the first three years, the writing was mainly in my head. I did a lot of it running at the time and that was great for working out plots, characters, twists, motivations etc.

Once my youngest was at school and I was doing a writing course, I found I had time to work from the computer in our front room. As they got older, I’ve been driven into the kitchen, but I’ve learnt to write pretty much anywhere, cafes, trains, buses, parks...

Every now and then I get away on writing retreats, and I have loved those. I particularly enjoyed trips to Gladstone’s Library in Cheshire and Retreats for You in Devon.


What is your idea of writing Heaven and writing Hell?

Writing Heaven is going on a writing retreat. Writing at home is always snatched time first thing in the morning, or in the evening after work, and is often interrupted by the demands of family life. Being on a retreat is wonderful because I get meals cooked, and don’t have to worry about the housework. I usually end up being very anti social, starting early in the morning and writing till very late at night, and it makes for a very productive experience.

Writing Hell is when my writing gets derailed by the demands of life. Sometimes work is so busy that it takes up all my thinking time and I just don’t have enough brain space for anything else. On other occasions an emotional event, such as a bereavement has completely floored me and I haven’t been able to write. Stress is never good as it interferes with my creativity. But I’ve learnt that this happens from time to time, and usually when it passes I find myself returning to writing with enthusiasm.

Are you your worst critic and why?


I am, particularly during the editing process.The first draft is usually total rubbish, so I have to be able to step back and work out what needs to change to fix it. Then I have to rewrite, and rewrite and rewrite until I get to the point where someone professional needs to take a look. I was really lucky with Echo Hall to have a fantastic editor Scott Pack who was able to point out some serious flaws and ways to sort them out.

I’m pretty happy with the finished version of Echo Hall, as I think we got it to the best place we could and there is a moment when you have to stop otherwise you over cook it. But I suspect in a few years I’ll look back on it and want to change something.

I am very active on social media, on Twitter I am @aroomofmyown1 and Facebook Virginia Moffatt and Echo Hall. I’m always happy to talk about writing, reading, politics, and anything else that takes my fancy. I also have a blog, ‘A Room of My Own’ where I discuss books, writing and post the occasional review (https://virginiamoffattwriter.wordpress.com/). I’m always happy to chat about anything that interests me.

Virginia Moffatt was born in London, one of eight children, several of whom are writers. Her eldest brother writes about theology and politics, one sister is a poet, a second a translator and her twin sister is a successful author.

Virginia has always been a writer but began to take it seriously only in 2004, when she first had the idea for Echo Hall. In 2009, she setup her blog, ‘A Room of My Own’, where she publishes flash fiction, short essays and reflections about writing and reading.

Virginia also writes on political and faith issues. She has recently dited a collection of essays, Reclaiming the Common Good: How Christians can help rebuild a broken world, published by Darton, Longman and Todd in 2017. Her Lent course, Nothing More, Nothing Less, based around the film I, Daniel Blake, will be published by the same publisher on the 30th November 2017.

After working in social care for 30 years, Virginia left local government to work for the Christian think–tank Ekklesia in 2014.She currently works for a multi-academy trust as a procurement and contracts manager.

Virginia is married to Chris Cole, director of Drone Wars UK. They have three children and they live in Oxford.

Huge thanks to Virginia for being such a lovely author in our spotlight today and for answering our questions so thoughtfully.