I am a frequent visitor to the History of the Great War website and I am always fascinated in the timeline of events which are so clearly marked out for each month of the war.

This month I will look at what was happening in April,1917.

On April 2, 1917, President Woodrow Wilson went before a joint session of Congress to request a declaration of war against Germany. On April 4, 1917, the U.S. Senate voted in support of the measure to declare war on Germany. The House concurred two days later. The United States later declared war on German ally Austria-Hungary on December 7, 1917. 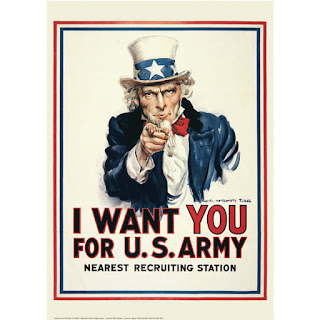 More than four million copies of this image of 'Uncle Sam ' were printed between 1917 and 1918.


Incidentally I visited the Imperial War Museum as a young teenager and bought a copy of this poster which was on my bedroom wall for quite a while.

H.M.S. "Jason" (torpedo gunboat) sunk by mine off west coast of Scotland.