Marianne is stuck in a loveless, unhappy marriage. After forty-one years, she has reached her limit, and one evening in Paris she decides to take action. Following a dramatic moment on the banks of the Seine, Marianne leaves her life behind and sets out for the coast of Brittany, also known as the end of the world.

Here she meets a cast of colorful and unforgettable locals who surprise her with their warm welcome, and the natural ease they all seem to have, taking pleasure in life s small moments. And, as the parts of herself she had long forgotten return to her in this new world, Marianne learns it s never too late to begin the search for what life should have been all along.

With all the buoyant charm that made The Little Paris Bookshop a beloved bestseller, The Little French Bistro is a tale of second chances and a delightful embrace of the joys of life in France.


At the start of the book we meet Marianne Messmann , a rather sad and lonely figure who feels that, aged sixty, her life is over. On a trip to Paris with her boorish husband, Lothar, Marianne makes the momentous decision to jump from the Pont de Neuf Bridge into the river Seine below. However, for Marianne, the fickle finger of fate has a funny way of intervening and rather than this being the end of her life, by a strange quirk of fortune, she is rescued by a stranger.  This unexpected opportunity starts a journey of self-discovery, which will take Marianne away from ill-mannered Lothar and a glorious escape to the beautiful Breton coastline, and into situations she never would have believed possible.

The story is beautifully written and sensitively translated so that nothing is lost in switching from its original German. There is an almost old world charm to the narrative which looks at life in all its many guises and which introduces us to heart-warming characters that make you smile and laugh out loud. The author has a distinctive style of writing which is both charming and thoughtful. She delights in looking at the minutiae of people's lives and she gently unravels the complexities of relationships with such empathy and warmth that it is difficult not to be captivated by the story as it gently unfolds.

I have spent holidays in this quiet part of Northern France and the author captures to perfection both its beauty and charisma. Brittany and the area, around Corncarneau, so thoughtfully described in the story, really comes alive. I could easily re-imagine the sun drenched streets and the hustle and bustle of its quaint harbours and colourful markets.

The Little Breton Bistro is a delight to read from start to finish.

Best Read With...Buckwheat pancakes and a cup of apple cider, gently sweet from the Breton sunshine.. 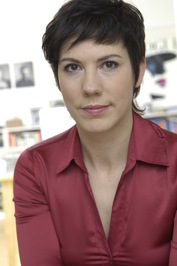 Born in 1973, Nina George is a journalist and an author of numerous best selling novels which have been translated into several languages. The Little Paris Bookshop was a phenomenal hit around the world. The author lives in Hamburg.

Find out more on the author's website by clicking here

My thanks to Hayley at Little Brown.co.uk for my review copy of this book