The story of Venezuela told through the adventures of kindly giant, Octavio. Struggling to conceal his illiteracy, he embarks on a transformative journey that unearths his life's purpose.

Winner of several literary awards, this critically-acclaimed and instantly engaging tale reveals Miguel Bonnefoy to be a gifted storyteller.

Octavio’s Journey sees the development of Don Octavio, a native of Trinidad, who, as the novella begins, lives in poverty in a Venezuelan hillside dwelling. Like his father before him, Octavio is illiterate, eking out a meagre living doing menial tasks and making excuses, like bandaging his hand,  for his inability to write. When he comes into contact with a woman, aptly named, Venezuela, Octavio begins the tentative journey to overcome his difficulties.

The story is nicely written with some additional mystical elements which add depth to the narrative. There were some parts of the story that I enjoyed more than others, but overall, I appreciated the allegorical nature of Octavio’s Journey, which I think was more about the country itself rather than the characters. I have to say that I found parts of the story a little bit difficult to understand but that is more my failing rather than due to any weakness in the writing.

The author writes well and considering the story is concise it certainly packs quite a punch. The novella comes in at around 95 pages which should be comfortable enough to read easily in a couple of hours however, I found that I read the book quite slowly as there was much to digest and consider.

It's a story about fate, destiny and discovery. 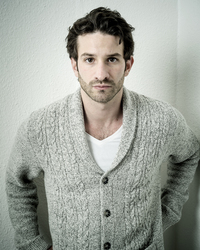 Miguel Bonnefoy was born in France in 1986 to a Venezuelan mother and a Chilean father. In 2013, he was awarded the Prix du Jeune Ecrivain, which has previously helped to launch the careers of writers such as Marie Darrieussecq. Octavio's Journey is Bonnefoy's first novel, written in French.