Review ~ The Daughter of the House by Rosie Thomas


Meeting up again with Devil and Eliza Wix, from The Illusionists is a real treat, although to be honest you don't need to have read this one, before starting Daughter of the House, but, as with any sequel, it's nice, but not essential, to know what's gone on before.

The story opens in 1910, and focuses on Zenobia, the eponymous Daughter of the House, known to family and friends as Nancy. She is endowed with a rare gift of being able to see visions, small snippets of the past or the future, which Nancy refers to as 'The Uncanny'.  When her unusual skill is spotted by a talented medium, Nancy sees a way to lift her family from their impoverished state and uses her gift to ensure the stability of the family's down at heel theatre, the Palmyra, which featured so prominently in The Illusionists.

The story captures perfectly the momentous changes that were occurring during the early part of the twentieth century. The Great War had changed the status quo, and women were determined to have their voices heard, and Nancy is no exception. Struggling against the constraints of society, Nancy is determined to be independent but her unique gift acts as both a challenge and a curse

The story draws you in from the beginning with an array of characters that are both exhilarating and exasperating in equal measure. Nancy's character is particularly well done and, I think, typifies what life was like for a generation of young people, and young women in particular, who were striving to build a world away from the terrors of the First World War. The gay young things of the roaring twenties, and flirty thirties, come alive in so many ways, from the gin infused gaiety of country house parties, to the lively strength of the suffragist movement. And yet, in contrast is the unbearable collective sadness  caused by the death of so many young men during the war, and of the desperate lengths that people went to in order to make contact with their loved ones beyond the grave.

All these strands combine to make this a memorable story and one that stays with you long after the last page is turned. 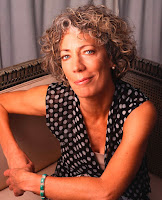 Rosie Thomas talks about The Daughter of the House here

My thanks to Harper Collins for my review copy of this book.