The theme for this month's WW1 poems


Those poets who are perhaps better known for their stories 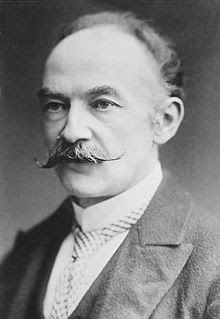 That night your great guns, unawares,
Shook all our coffins as we lay,
And broke the chancel window-squares,
We thought it was the judgement day

And sat upright. While drearisome
Arose the howl of wakened hounds:
The mouse let fall the altar-crumb,
The worms drew back into the mounds,

The glebe cow drooled. Till God called, "No;
It's gunnery practice out at sea
Just as before you went below;
The world is as it used to be:

"All nations striving strong to make
Red war yet redder. Mad as hatters
They do more for Christés sake
Than you who are helpless in such matters.

"That this is not the judgment hour
For some of them's a blessed thing,
For if it were they'd have to scour
Hells floor for so much threatening...

"Ha, ha. It will be warmer when
I blow the trumpet (if indeed
I ever do; for you are men,
And rest eternal sorely need)."

So down we lay again. "I wonder,
Will the world ever saner be,"
Said one, "than when He sent us under
In our indifferent century!"

And many a skeleton shook his head.
"Instead of preaching forty year,"
My neighbor Oarson Thirdly said,
"I wish I had stuck to pipes and beer."

Again the guns disturbed the hour,
Roaring their readiness to avenge,
As far inland as Stourton Tower,
And Camelot, and starlit Stonehenge.


Although well known for his Wessex inspired classic fiction - Thomas Hardy considered himself to be a poet and is now considered to be one of the greatest twentieth century poets.