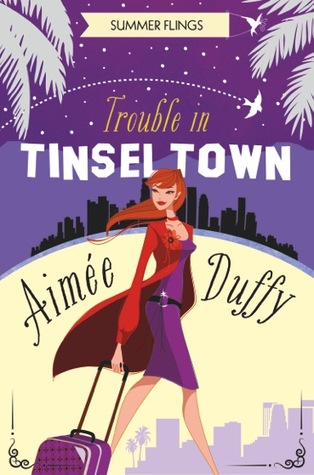 will be included in the Google Play deal of the week from 1st-10th September!
Also on Amazon Kindle

Trouble in Tinseltown is the first of the Summer Flings novellas – a series of short, laugh-out-loud and flirty rom coms. Armed with a degree from Oxford that she doesn’t have a clue what to do with, Ciara Bree convinces her two best friends, Elle and Gem to spend their first summer of freedom backpacking across the globe. Now it’s time to shop, sunbathe, think about boys for a change, and party hard… But their plan to sneak into an exclusive celeb party in West Hollywood backfires. Elle’s gorgeous older cousin, Zack, is called to the rescue and despite knowing she should stay away, Ciara just can’t seem to resist him.

If you haven’t read Aimee, now’s the time to dip a toe!

Here's an extract to tempt you even more.....

His grin was just like it had been last night, or this morning, when she’d told him she didn’t scream ever during sex and he’d proved her so wrong.
Ruthlessly, she pushed the memory away and pressed on, refusing to be distracted by the thrum in her blood that insisted she take him up on his offer. Right Now. ‘I’m not looking for a relationship, or to get involved with someone I know. I’m not a stayer.’
He just stared at her with amusement glittering in his eyes. That wasn’t the least bit insulting, she thought wryly.
‘So what I’m trying to say was that last night was a mistake. I’m sorry.’
‘You really believe that, don’t you?’ he asked, placing the tray down then putting her coffee on it. ‘You really think that last night was a one off.’
He grabbed her hips, pulling her closer and her heart took off full speed. ‘It was. It has to be.’ She tried to reply firmly.
His lips brushed her ear and she shivered. ‘You’re wrong. Last night wasn’t a mistake, and this isn’t over – it’s just on hold until you realise that.’
She was about to protest but he kissed her first and she was gone as thoroughly as she had been the night before.
He pulled away, far too soon. ‘When you figure it out, you have my number.’........

My thanks to Amy Winchester at Harper Fiction
for permission to print this extract from Trouble in Tinsel Town.
Posted by Jaffareadstoo..... at 08:55