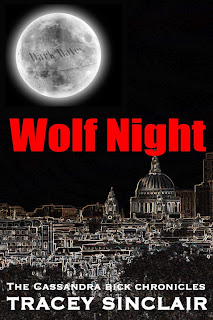 
After narrowly averting a supernatural war in London, Cassandra Bick just wants life to get back to normal. Or as normal as life can be when you run a dating agency for vampires, your best friend is a witch and the oldest, strongest and sexiest vampire in town is taking a very personal interest in your business. But when a vicious new supernatural enemy threatens her friends, Cass finds herself once again fighting for the fate of her city – and having to face some demons of her own.

Wolf Night is Book 2 in the Dark Dates series, the Chronicles of Cassandra Bick.


Wolf Night is the second of the Cassandra Bick chronicles – did you feel more of an obligation to make this book even better than the first?

Yes, definitely! I was really lucky that the overwhelming majority of the reviews I got for Dark Dates were great, and feedback was really positive, but that did make me worry that I would somehow let people down if the second one wasn't better. And by then I had fallen in love with the characters so I felt I had a responsibility to them, too, to tell the story well. Luckily so far most people have liked it!

Wolf Night appears darker in content and yet there is still lots of humour – is it easier write funny dialogue or scary scenes?


It is darker, I think – it deals a lot more with bigotry and intolerance and I think that naturally makes it darker in tone, and I wanted to up the stakes somewhat after the first book, to add a sense of real danger and threat. But I don’t think one type of scene is easier than the other to write – it’s just a question of going where the story takes you, so I find things just flow in the direction they need to, and the action sets the tone. I do have a habit, though, of going back over scary or darker scenes with an eye for the pretentious and the ridiculous to puncture that, and lighten it up with some humour, to try and balance it out. One of the most enjoyable things about the book is that the characters – especially Cass – have such a snarky outlook, it’s great fun to write.

If Wolf Night was optioned as a movie, who would you like to see in the leading roles?

Ooh, tough one! Although she’s very American, I love Kat Dennings from Thor and Two Broke Girls – she has the kind of snarkiness I like. When it comes to the male leads I always just think about men I find attractive – actors like Charlie Hunnam, Timothy Olyphant, Jensen Ackles – but that’s probably because I like to think as writer I’d get a visit to the set and would be able to drool over them…


And finally are you Team Laclos, or Team Cain?

I started out totally Team Cain – I basically wrote him as my ideal man – but the more I see of Laclos, the more I like him. He has a real sense of humour about himself, he’s funny and, of course, his utter debauchery appeals to my naughtier side. So I think, like Cass, I would struggle to choose!


BIO: Tracey Sinclair works as freelance copywriter, editor and legal directories consultant. A diverse and slightly wandering career has included writing factsheets for small businesses, creating web content for law firms, subtitling film and TV and editing one of the UK’s largest legal directories. A keen blogger, she regularly writes for online theatre site Exeunt and science fiction site Unleash the Fanboy and her blog Body of a Geek Goddess was shortlisted in the Cosmopolitan Blogger Awards 2011. Her work has been published in a number of magazines and anthologies and her short play Bystanders was premiered in 2011 as part of the CP Players New Writing Season at Baron’s Court Theatre, London. She has published two small press books (Doll and No Love is This, both Kennedy & Boyd) before publishing the Dark Dates series.

Thanks for visiting us again Tracey - we look forward to reading more of Cassandra Bick's urban adventures in future chronicles.


Having been introduced to Cassandra Bick in Dark Dates, I couldn't wait to meet up with her again in the second of her adventures. I found Wolf Night to be an altogether darker story with some truly nasty characters, who from the outset seek to cause as much damage as they can. Yet, throughout the darkness of the story, there is a wonderful thread of humour, which is a delight to read and adds some necessary contrast.

Those who are familiar with Dark Dates will rejoice that their favourite characters have returned stronger than ever. There is just as much passion on the pages as before, but this time round the characters are well established, their supernatural skills are well honed, and whilst Cassandra, Medea and Katie remain the heart and soul of the story; it is in the interaction between the supernatural alpha males, Laclos and Cain, where the story really starts to zing off the scale, as love, hate, jealousy, and overwhelming lust, all spiral out of control.

I am sure that the author is onto a real winner with this series. The urban fantasy world in which these characters roam has the potential to run and run and run.....