I am delighted to welcome Kim Fay, the author of The Map of Lost Memories


The Map Of Lost Memories

The one thing to remember about an adventure is that if it turns out the way you expect it to, it has not been an adventure at all...

...Shanghai, 1925. Irene, a museum curator (and, unofficially, a treasure hunter) is searching for a set of legendary copper scrolls which describe the forgotten history of Cambodia's ancient Khmer civilisation. Her mentor has sent her to China to enlist the help of Simone, a mercurial Frenchwoman who - along with her notoriously violent husband, 'the most dangerous man in the Orient' - has a reputation for both stealing artefacts and starting revolutions. Irene and Simone set off through the Cambodian jungle to search for the scrolls, but it soon becomes clear that each is determined to acquire them for her own reasons, and that once they have located them it will be every woman for herself ...Gripping, evocative, lavish and thrilling, this is an unforgettable book that was listed as one of Amazon's top 100 Breakthrough Novels before it was even finished.


Thank you, Kim for taking time out of your busy schedule to answer a few questions about your debut historical novel, The Map of Lost Memories.

What inspired you to become an author?

I was a reader in my heart even before I could read – when I was an infant, while my dad was at work, my mom would read whatever book she was reading for herself out loud to me. As I got older, my parents dropped me off at used bookstores the way other parents dropped their kids off at video arcades, and they always let my sister and me order as many books as we wanted from the Scholastic catalogs that came around school a few times a year.

In addition, I come from a family of storytellers. When I was a young girl, I would tuck under the covers with my sister while our dad made up absurd stories about Raggedy Kojak (a pathetic Raggedy Ann doll that had lost its hair) and his faithful sidekick, Mousiestein. On the nights when he did not whip up one of his episodic tales, our grandpa sat on the side of our bed telling us exotic stories about his life as a sailor in Shanghai in the 1930s.

I think all of these things were influential, but I also think that some people are just born writers. It’s something inside them that can’t be traced to any specific source. It just is. I started writing when I was ten, and I haven’t stopped since. I wrote poetry, short stories and more than a dozen novels in junior high and high school; and as an adult I wrote three “serious” novels before the publication of The Map of Lost Memories.

I can’t not write. In fact, when I go too long without writing, I become depressed.

Are you a disciplined author, and where do you write?

My best answer to that is: I am disciplined when I am writing. For example, right now I need to focus on the upcoming publication of my debut novel, so the bulk of the time and energy I normally spend writing is going in that direction. I am still doing some writing now, but not on the usual disciplined schedule I set for myself – I’m just making sure I have one chapter written when I meet with my writing group every three weeks. Normally, though, when I’m focused on a book, I assign myself 4-5 hours a day, 4 days a week. I find that I write best a few days in a row, and then require a “rest period” where I think about what I have written and am going to write before starting up again.

As for the specifics, I write in the morning. The earlier the better, since I don’t seem to have any focus in the afternoons and evenings. I write on a laptop at my great-aunt’s secretary desk in the back bedroom/office of my apartment in Los Angeles. My window looks out over rooftops and a few soaring palm trees to the Hollywood hills in the distance. I love this view because the light on the backs of the stucco apartments and over the low hills changes in so many gorgeous ways throughout the day.

On a side note, lately I’ve been working on my new novel on a typewriter. I wrote about this in a recent blog post: Literateinla

What gave you the inspiration for your novel- The Map of Lost Memories?

There are two concrete inspirations for the novel. The first is my grandpa. He was a sailor in the early 1930s, and his stories about Shanghai are the reason the city figures so prominently in the book. The second inspiration is Andreand Clara Malraux. I read about this young French couple in the book Silk Roads. In the 1920s, when they were budding Communists in their early twenties, they traveled to Cambodia to steal a bas relief from the temple of Banteay Srei. They are the original model for Roger and Simone Merlin, although Roger and Simone are quite different from the Malrauxs.

All photographs by kind permission of Kim Fay

Do you write books for yourself, or other people?

I definitely write for myself. I write about subjects that I want to research and about characters that fascinate me. And I’m obsessed with writing about the places I love. But that doesn’t mean I don’t have the reader in mind. As I was writing The Map of Lost Memories, I thought about my grandma who had passed away. Her life was very limited by her finances and her health, and so she was a voracious reader – if she couldn’t get out-and-about physically, at least she could travel in her head. I thought often about people like her and how much I wanted to be able to take them on an adventure to a part of the world that meant so much to me.

Early readers of The Map of Lost Memories have mentioned their desire for a sequel in their reviews. And yes, there will be a sequel, although it will take place in 1950s Cambodia and the main characters will be Irene’s daughter and Kiri, the young boy from the jungle. I can’t say anymore without revealing some of the mysteries in The Map of Lost Memories – the two plots will be tightly connected. And in any case, that is coming, but it is not my next novel. It takes me years to plot a book, and while the sequel germinates in my thoughts, I am working on an untitled novel that I carried around in my head while I was writing The Map of Lost Memories.

The main character is an American woman born in Vietnam in 1937. As an adult, she is a culinary anthropologist who studies Vietnamese culinary traditions and feeds American soldiers. This, though, is the backdrop for the mystery/suspense element. I was raised on Nancy Drew, so there will always be a mystery/suspense element in my books! This one will involve the murder of the main character’s best friend. As in The Map of Lost Memories, there will be plenty of family secrets revealed, and all of the characters’ stories will come together in the end. And again, I hope to immerse readers in a time and place that might not be familiar to them.

What are you reading at the moment?


Mostly I’m reading research for my new novel: a biography of Ngo Dinh Diem, Daniel Ellsberg’s Secrets about the Pentagon Papers, The Fall of Saigon, personal accounts of daily life in Saigon in the 1930s, ‘40s and ‘50s, and so on.

For my leisure reading I’m almost done with Penelope Lively’s How It All Began. I am a huge fan of Lively and think Moon Tiger is one of the best modern novels I’ve ever read.

Kim - thank you so much for giving such a unique look into the writing process. Jaffa and I have loved reading about your inspiration for The Map of Lost Memories.

We wish you continued success with your writing career and very much look forward to the publication of your next book. 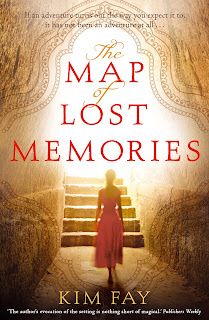