A group of close friends, their bonds forged at the nursery gates twenty years ago, have celebrated, commiserated, and grown together. Georgie and Phil, Sarah and Dom, Natalie and Kit, Annie and Rupert, Flick and Andrew, Vanessa and Ross, know everything about each other…until that is, they find out about the affair. Now a crack appears in everything. Could one betrayal really destroy friendships forged over decades? A story about long-term friendship, love, marriage, parenthood, and middle-life, this beautifully written, sensitively wrought drama asks, ‘what happens when boundaries are crossed, and friendships betrayed’. How would you fix what you believed could never be broken?
📖 My Review..
Six couples have been friends for twenty years. They have shared the ups and downs of life, seen their children grow from children to adults, survived heartache and illness but through everything they have kept one date in the diary when they all share a weekend at the holiday home of Annie and Rupert. This is usually the highlight of the year but when we meet Georgie and Phil, Sarah and Dom, Natalie and Kit, Flick and Andrew, Vanessa and Ross, there is an undercurrent just bubbling below the surface and emotions seems to be heightened more than ever.
When evidence of an affair between two of the friends emerges it alters the dynamic of this group forever and threatens the stability of what were once thought of as rock solid marriages. The affair devastates everyone and as heightened emotions are brought to the surface so the question remains of how everyone will  deal with the inevitable fall-out.
The story flows well, highlighting the close friendships which have developed over time and the minutiae of life as each of the six couples bring their own distinct personalities into the mix, closely observing all the actions and reactions, and the heightened emotion of anger, sadness, lust and mistrust.
Other People's Husbands is an observational look at the complexities of friendship and of the devastating consequences of betrayal.

Elizabeth Noble is a Sunday Times No.1 bestselling author who has sold over 1 million books to date. She was born in Buckinghamshire and had a peripatetic childhood, moving often with stints in both Canada and Australia. She studied English at St. Edmund Hall, Oxford before working in editorial, marketing, publicity and sales in various publishing houses.
Elizabeth wrote her first novel, The Reading Group, to avoid going back to work. It became an instant No.1 bestseller, was nominated for Newcomer of the Year at the British Book Awards and sold over a quarter of a million copies. Since then she has written many bestsellers including the Richard and Judy Book Club picks, Between a Mother and her Child and Love, Iris.
Elizabeth lived briefly in New York when her children were young but now lives in a small village in Surrey. She loves walking, yoga, cooking, and is an active part of her local community where she writes a monthly column for the parish magazine. She is a grandmother of two and has recently taken in a family of Ukrainian refugees.
Other People’s Husbands by Elizabeth Noble is out 21st July, published by Penguin Michael Joseph in hardback, priced £14.99
Twitter #OtherPeoplesHusbands
@MichaelJBooks
@ed_pr 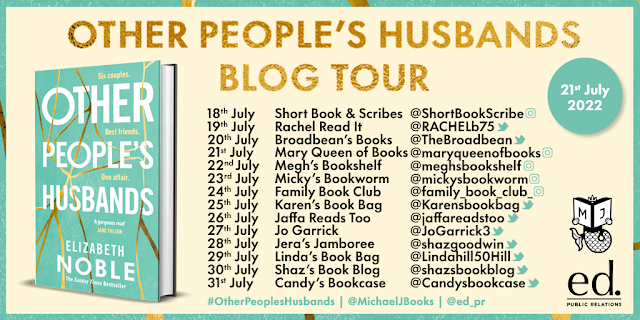