What happens when you learn the person closest to you has led a life of deception? After her mother’s funeral, Alice Kent is approached by a stranger called Angus Tweedy – a man who claims to be her real father. But why now? What could Angus hope to gain, thirty years on? As Alice wrestles with the possibility that her much-loved dad Ralph is not her real father, her quest for the truth takes her on a journey into the past. As she unravels the secrets her mother kept so desperately hidden, whatever the cost, a very different woman is unveiled; a woman shaped by trauma and poverty, and a childhood beyond her daughter’s imagination.

When Alice Kent is approached by a stranger at her mother's funeral claiming to be Alice's father it opens up so many secrets about her mother's life that Alice doesn't really know where to start to get to grips with it all. Not wanting to upset the man she considers her father, or her young sister, Alice decides to trace her mother's life and so a story emerges of a woman who did what she had to do in order to survive.
Deception takes the concept of thinking we know everything there is to know about someone we love and yet as Alice discovers underneath is a story of secrets, lies and heartbreak. This is the kind of story which this talented author does so well, she knows how to build up the tension whilst at the same time giving us a story which really tugs away at the heartstrings. The poverty of the nineteen-fifties and the relative freedom of the swinging sixties is very much at the heart of the novel and I enjoyed following Alice's journey as she goes back in time to discover who exactly was the woman she called her mother.
What is always guaranteed with a Lesley Pearse novel is great entertainment and this thirtieth novel in her repertoire is certainly no exception as, right from the start, Deception captured my imagination and became a fascinating read about a woman who took the chances life gave her and made the best of what she had.

Lesley Pearse is a global No.1 bestseller with fans across the world and sales of over 10 million copies of her books to date; this year she celebrates the publication of her highly anticipated 30th novel. One of the nation’s best-loved storytellers – a Lesley Pearse book is sold every 4 minutes in the UK – Lesley is a master of the gripping storyline, always introducing her readers to characters that are impossible to forget. Although there is no set formula or easily defined genre for a Lesley Pearse novel, strong heroines and jeopardy are pervasive, and she always engages the reader completely.
Deception is Lesley’s 30th bestselling novel.
Twitter @LesleyPearse #LoveLesley #Deception
@MichaelHBooks
@ed_pr 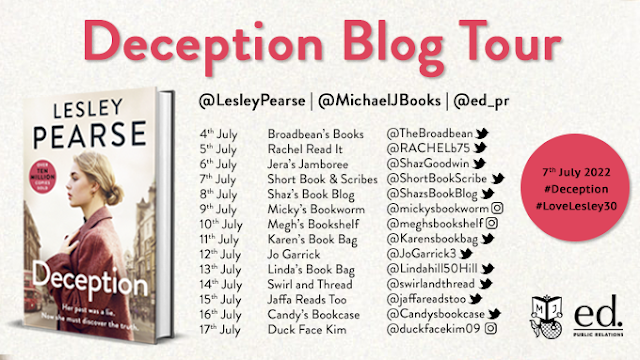