📖 Blog Tour ~ The Last Hours In Paris by Ruth Druart

Paris 1944. Elise Chevalier knows what it is to love...and to hate. Her fiancé, a young French soldier, was killed by the German army at the Maginot Line. Living amongst the enemy Elise must keep her rage buried deep within.
Sebastian Kleinhaus no longer recognises himself. After four years spent fighting a war he doesn't believe in, wearing a uniform he despises, he longs for a way out. For something, someone, to be his salvation.
Brittany 1963. Reaching for the suitcase under her mother's bed, eighteen-year-old Josephine Chevalier uncovers a secret that shakes her to the core. Determined to find the truth, she travels to Paris where she discovers the story of a dangerous love that grew as a city fought for its freedom. Of the last stolen hours before the first light of liberation. And of a betrayal so deep that it would irrevocably change the course of two young lives life for ever.
📖 My review..
This powerful dual timeline story takes us back to occupied Paris in 1944 when Élise Chevalier is eking out a meagre existence with her mother and younger sister. Poverty strikes hard and even Élise's job at the bank isn’t enough to keep her family from going hungry however, Élise isn’t content to just let the Germans manipulate her beloved city and does all she can to help those who are in need. When she meets Sébastian Kleinhaus, in a book shop, Élise is little prepared for the effect that meeting this young German officer will have on her life.
The story then flips between Élise and Sébastian’s emotionally powerful story in the spring and summer of 1944 and that of Joséphine Chevalier, a young woman, in 1963, who is searching to find out more about her past and is determined to discover why her mother, Élise, has kept so many secrets from her. Both time frames are equally compelling and whilst I was comfortable in 1963 with Joséphine and her quest for the truth, I was definitely more engrossed in Élise and Sébastian's story especially as the war time element really tugs away at the heartstrings.
Beautifully, and emotionally, written, The Last Hours in Paris combines the very best of historical fiction with a powerful and gripping love story.
🍜Best read with..a bowl of French onion soup and a freshly baked baguette
About the Author
Ruth Druart has lived in Paris since 1983, the city that inspired her to write her first novel. The Last Hours in Paris.
Twitter @RuthDruart #TheLastHoursInParis
@headlinepg 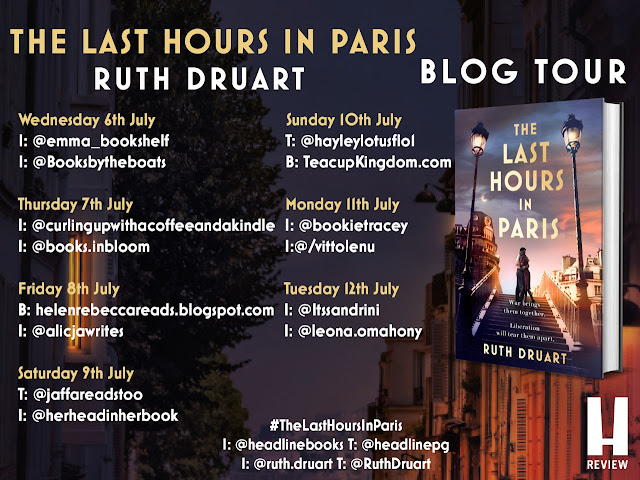