The author in my spotlight is...Thushani Weerasekera

I am delighted to welcome Thushani Weerasekera 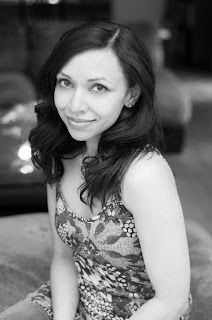 
London, 1866. Beautiful, unworldly Jemima - the Indian ayah of William Hayward's family - is abandoned in a shabby lodging house in Hackney by her once-trusted English memsahib. From that moment forth, she is driven by one goal: to return home to her humble but familiar existence in India. But life for Jemima is far from easy and she finds that she must compromise her morals in order to survive the dark underbelly of Victorian London. Will she remain in England as the low-class, native mistress of a high-class white man? Or will the call of the East take her back to her life in India?

Tell us a little about Thushani Weerasekera, author.

Well, I’ve actually been a professional, jobbing actor for much of my life. I started out in T.I.E (Theatre in Education) productions but I have also acted in shows for television, theatre and radio, as well as independent and short film productions. In 2012, I decided to take a risk by quitting acting temporarily to concentrate my efforts in completing ‘Ayah’, as well as trying to get it published. I took on a ‘normal’ job to pay the bills by working at the V&A Museum in London and then left to work at the Houses of Parliament, all the while, still dreaming, hoping, wishing that ‘Ayah’ would one day be published. I currently still work at Parliament and earlier this year, I was on the verge of giving up on my dream, but the gamble paid off and ‘Ayah’ is finally here, and I am a very relieved little bunny.

From a young age, my school reports always said things like, ‘Thushani is a very good writer,’ or ‘Thushani has a great imagination...her stories are enjoyable and well written.’ However, coming from an Asian background, where I was encouraged to pursue a career in dentistry or medicine, I never really entertained the idea that I could one day be an author. I have always loved reading books and writing stories but I never quite developed enough confidence in my teenage years to pursue a career in that field. I really think that when I stumbled into acting in later life, my imagination was fired up again and I began dabbling into playwriting for community theatre. I then tried my hand at radio play-writing, but nothing solid really came from that. It was only when I thought about learning to write for television in 2003, I realised that everything I wrote seemed to lend itself well to novel writing. It was then that I had an epiphany... to write a novel!

Without revealing too much, what can you tell us about your style of writing?

Gosh, I am not really sure if I know the answer to that after only having written one novel. What I can tell you... and this is where being an actor has helped... is that I think of myself as a traditional ‘story-teller’ first and foremost. I see things very vividly in my head and then I describe the pictures I see as if I am telling the story to someone in front of me. I then write my sentences as if I am writing a musical phrase – sounds odd but I have to balance a sentence out and if a word doesn’t fit the rhythm in my head, I’ll find a similar one that does so my sentence sounds lyrical. Does that make sense? I bet you’re sorry you asked now.

Where did you get the first flash of inspiration for your novel, Ayah?

It was when I was asked by the Museum of London to write and perform a monologue based on an actual figure from the past. The character chosen for me was ‘Jemima’ an Indian ayah abandoned in London by her English memsahib. I would walk around and talk to visitors in character, telling them how I (Jemima) was left stranded in an Ayahs’ Home in East London, and that I was trying to find a way to make it back to India. Yes, ‘Jemima’ actually existed and she was the inspiration for the ‘Jemima’ in my novel.

I think people are still attracted to the relationship between India and Britain harking back to colonial times. I am guessing (and hoping) that readers will love the fact that the story is set in Victorian London but it’s about a lowly, Indian servant... not the usual run-of-the mill female protagonist you find in the genre of Victorian Romance. Although ‘ayahs’ have been written about in various ways, they are usually secondary characters or feature in the supporting cast of stories about the British in India. I’d like to think my story is original and unique in that it puts an ayah centre stage in the setting of Victorian London and sees life through her eyes in a period of time that I and hopefully, readers are fascinated by. Also, readers of ‘Ayah’ have been lovely enough to tell me that the first paragraph in the opening chapter, describing the sights, smells and sounds of the port of Calcutta, is what lured them into ‘Jemima’s’ world and I’m thrilled about that.

In your research for Ayah, did you discover anything which surprised you?

I am a great fan of the period drama, especially BBC productions like Pride & Prejudice, Bleak House, Jane Eyre etc and as an actor I had always wanted to appear in one, but my earlier naivety and ignorance made me believe that there were no roles for Asian actors in such dramas because Asians and Blacks were not around in British society back then. I really thought Asians did not arrive in Britain en masse until the 1940s and 50s, which is why they were not depicted or referred to as much in these types of productions. Imagine my surprise, when I started researching their stories to find that they were, in fact, brought over to this country as far back as the late 17th century. To me it was a huge revelation to know that Asians were around in British society centuries ago; however, they were not deemed worthy enough to be written about in great detail...females in particular...which is why I could not find much in depth information on the ayahs and had to rely heavily on guess work and imagination to write my book.

Whenever I have free time really and nowadays that would be in the evenings after work and at the weekends. I don’t really have a favourite place, but I like to have absolute peace and quiet, and a couple of cups of fresh coffee to start off with. I finished writing the first draft of ‘Ayah’ with no one around but my two cats: Pob and Moomin. Pob would always jump on my lap, demanding cuddles and Moomin would walk all over my laptop keyboard, whilst I was trying to type. It was a bit annoying and disrupting at the time but now I like to think that some of their feline energy and love went into ‘Ayah’ as I wrote it. I also find their presence really comforting and so they are the only living creatures I will allow into my writing space...those cats and I have been through a lot together!

Yes, I do. I am working on it at the moment. It’s called ‘The Seventh Child’, and that’s all I can say for now! Thank you!

For more info on ‘Ayah’ with links on how to buy, visit Thushani’s Facebook page

Thushani , thank you so much for being our guest today and for sharing your lovely book with us. Jaffa and I wish you continued success with your writing and look forward to you returning to tell us all about The Seventh Child...
~***~