The author in my spotlight is...Clare Coombes 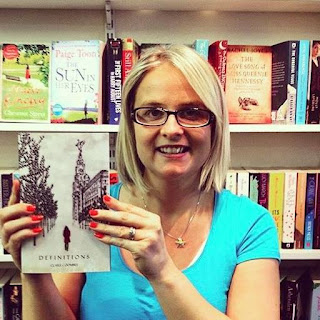 Clare is chatting to us today about her debut novel, Definitions


Hi Clare, it's lovely to have you as our guest today..

Tell us a little about Clare Coombes, author.

Clare Coombes has been published and commended for her short stories and novel extracts in a number of publications, including the Writers’ Forum, the Fish Short Memoir Prize, Subtext Magazine, The Lancashire Evening Post, Know Magazine and various academic journals. She was also a finalist in the Writing on the Wall Pulp Idol contest, leading to publication in the anthology 'Pulp Idol Firsts 2014 '. Clare has a Masters in Writing from Liverpool John Moores University.. Definitions is her debut novel. You can follow her on twitter @coombes_clare or via www.clare-coombes.com


How long have you been writing and what got you started?

I’ve been writing for as long as I can remember. My love of reading really got me started. Sorry to steal words from other writers but I think Alan Bennett’s quote from his play 'The History Boys', best sums up why I write.

“The best moments in reading are when you come across something - a thought, a feeling, a way of looking at things - that you’d thought special, particular to you. And here it is, set down by someone else, a person you’ve never met, maybe even someone long dead. And it’s as if a hand has come out, and taken yours.”

I've always taken this to mean that books can be a form of support, that reading can be a chance to connect thoughts and feelings, helping people to feel less lonely and isolated in their own minds. It can make you feel more 'normal' to see someone you never met has written down things that you thought only existed in your own head. Through other worlds created by reading and writing, your own world can seem less threatening.

I wanted to write so I could be a hand that helped others, and work through my own issues. My very first piece of published writing was a non-fiction piece exploring young adult grief for a mental health magazine produced by the national charity, Mind. I've continued exploring loss, in its many forms, through my fiction, considering what it does to us and even what we can gain through it.

For me, reading and writing is part of a healing process and a way to survive.

What inspired you to write Definitions, and without giving too much away, what can you tell us about the story?

Although my first novel isn’t based on my life, I did put some of my emotional experiences into it. Because I lost my mum at a young age, I wanted to be that hand that came out to help people dealing with the same thing, at any stage of their lives. That’s why the characters in my book are all struggling with loss in some form, and I explore their reactions to it.

So I had my theme set from the start but not the genre in which to tell it. In fact this book never started out as a psychological thriller – it was actually an A-Z dictionary told completely in first person about a relationship that gradually became abusive. But it needed something more and felt a bit flat on its own so I decided to cross-genre it and bring the women’s fiction element within the thriller context. I started working on it in my Masters in Writing at Liverpool John Moores University in 2011 and it was just a few short stories then. But the workshops we did made it evolve.

Set in Liverpool Definitions is about a young woman who is missing and only her sister believes she has been kidnapped. With no close family, and the police showing little interest, Charley must track down Gina herself, using her sister’s custom definitions – random words and sentences summarising life events. This leads Charley to realise how little she really knows about Gina’s relationship with her fiancé and his family. It’s a sinister world she enters into, but Charley also has her own demons. But I also wanted to ask certain questions - Can you escape your past and move on? How well do you really know your own family? How far will they go to protect you?

I’ve used the architecture, language, humour and things particular to the city as I’ve always been inspired by writers who use their own ‘accents’ and places where they are from for inspiration, like Marian Keyes does with Dublin. I love so many types of books, from Science Fiction like ‘Brave New World’ , Kurt Vonnegut to family relationships wonderfully written by Kate Long and Sophie Kinsella’s style in addition to ‘Harry Potter’, ‘One Day’ and ‘The Book Thief’. My perfect genre to read would be historical women’s science fiction.

I put a timer on my phone for one hour and try to stick to this every day. Even when it is difficult and I feel like I’m getting nowhere, I always find something useful when I revisit what I’ve done.

I also try to dedicate some time to social media and real-life writer networking too. I think it’s important not be isolated as a writer. Social media means I can connect to authors around the world but locally I link in with literary organisations like Writing on the Wall http://www.writingonthewall.org.uk/ and independent books shops that support local writers like Write Blend http://www.writeblend.co.uk/

Other writers. I have an amazing writing circle and we meet once a month to critique each other’s work in a very supportive environment. But even though we’re all friends, we still give honest feedback and constructive criticism which massively helps us to grow and improve as writers. I’m going to use another writer’s quote to sum up what it feels like to find a group like this:

“You know, you spend your whole life feeling like you don’t quite fit in anywhere. And then you walk into a room one day, whether it’s at university or an office or some kind of club, and you just go, ‘Ah. There they are.’ And suddenly you feel at home.”
― Jojo Moyes, One Plus One

In addition to this, of course reading keeps me motivated. Writers are also usually readers and absorb everything they’ve ever read and when a book is really good you feel that you’ve lived it, that time, place, those feelings.

Family and friends are also so important as they can help spread the word about your book and keep you believing in yourself.

Learn to take criticism and shape it into your work. Remember that rejection from publishers and editors is nothing personal. Take a writing course and make sure you do some networking. You never need to do anything completely on your own as there is a lot of support out there.

Competitions are important for writers but they’re not everything.

Like in any profession, writers need to practise, train and learn. Some people say that writing should be a natural talent and you can’t teach it but that is wrong. All talent needs teaching, in any subject. You wouldn’t tell someone who was good at football or tennis that they didn’t need to train.

Exercise the writing muscle every day, even if it is only a letter, notes, a title list, a character sketch, a journal entry. Writers are like dancers, like athletes. Without that exercise, the muscles seize up.
– Jane Yolen

Read a ridiculous amount, watch, listen and learn from everything, so in the end the inspirations come out of everywhere. And remember:


The novel I’m currently working on is historical fiction but does have psychological thriller elements.

Here’s a bit about it.

The Fault in Our Stars meets The Book Thief.

Kurt Sander and Ida Sommer are two teenagers on the run from pre-war Nazi Germany who meet on the doomed St Louis voyage. Hiding their true identities from each other, the two fall in love. But when the truth about who they are and the real nature of the voyage emerges, they must overcome deep-rooted prejudices in order to survive.

When I heard the story about the St Louis, I was moved to tell it through the eyes of a young couple who fall in love. The voyage itself was a propaganda exercise by the Nazis to prove to the world that no one wanted the Jewish refugees. Unfortunately it was successful. They were rejected by Cuba, American and Canada and the only reason that the ship did not dock back in Germany was through the actions of the Captain, and a lot of money exchanging hands through refugee organisations. However, many of the refugees ended up in countries which were overrun by the Nazis the following year and therefore in concentration camps.

I have always been fascinated by the psychological impact of periods in history on the young people who live through them and what this can teach us in modern times. My influences for this series include Elizabeth Wein’s Code Name Verity and Rose Under Fire, which show the unbelievable bravery of young people taking an active part in World War Two and Jodi Picoult’s The Storyteller which looks at the effects of Nazi indoctrination on two brothers and the psychological effect of what people have done in their past.

The reason I am comparing my work to John Green’s The Fault in Our Stars is that it very strongly use the idea of fate and how young people manage situations that are out of their control and the way that love can always be present. In terms of The Book Thief , my trilogy brings both sides of Nazi Germany together, from those who have turned away from it, to those who have been forced out of it and how small pockets of resistance existed within children and young people despite the world around them. I want the books to contain an important message about tolerance and lessons from history but without preaching. 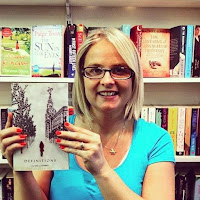 Definitions, published by Bennion Kearny, is available on Amazon (ebook and print) in Waterstones Liverpool One , Pritchard’s Booksellers News from Nowhere and Write Blend . To hear more about this book and my upcoming historical fiction novel, you can listen to my interview on Fab Radio International.com’s Take a Breaky, with Liverpool ECHO’s Ben Turner (breakywakey_ben ) or watch me on BayTV Arts Alive .


Huge thanks to Clare for sharing her novel with us and for giving such an insightful look into her love of writing. Jaffa and I wish you much success for the future..

You can read my review of Definitions