The author in my spotlight is .... Lorna Gray 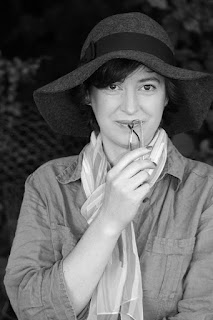 Lorna - I'm so pleased to welcome you to Jaffareadstoo...Can you tell us a little about yourself. How long have you been writing and what got you started?

To answer the last part first, like many authors, I wrote stories as a child. Of course I'd cringe if anyone got their hands on them now! But the love of writing has been a part of my life for a very long time. History has always been a big source of inspiration and latterly this has focused on the post-war period. It all finally came to the fore about six years ago when the first seeds of inspiration were sewn that became 1947 adventure In the Shadow of Winter.

And just to give you the full picture of Lorna Gray, I am also a book illustrator and archaeological illustrator. So creativity and reconstructing the past appear to have worked themselves into every aspect of my life! I live in the Cotswolds in a tiny house with my partner, our chickens (who are not allowed in the house though, no matter how that reads), a dog and a cat who are inseparable, and also a field full of ponies and goats.

Where did you get the first flash of inspiration for your novel, In the Shadow of Winter?

I can still remember that first moment of inspiration vividly. I was out in the field with the animals late one wintery night when I first discovered a sense of the isolation and danger experienced by lead character Eleanor. I'd just been talking to an octogenarian neighbour about his experiences (he was fourteen at the end of WWII) so my mind was full of the hardships witnessed by these fields over sixty years before. It was very lonely in the valley and absolutely freezing, and in my imagination I saw her stumbling through the storms of 1947 to discover former love Matthew Croft and helping him, and subsequently finding that a police manhunt is set to follow him right to her door.

Point number one: The History. In the Shadow of Winter is set in a real timeframe, immediately after the Second World War when Britain was in a very tight spot. It's the most fantastic period in which to set an adventure. Food shortages were worse than ever before and then the weather decided to hit the whole country with extraordinarily low temperatures, deep snows and incredible danger. Cities and urban areas were hit by power cuts (rural areas were exempt because they didn't have mains electricity anyway!) and one town ended up getting its electricity from a kindly submarine that moored up nearby and acted as generator. It would sound like fiction, only it isn't!

Point number two: The mystery. I can't tell you what happens because then it wouldn't be much of a mystery but I can say that suspicion, the police and the panicked flight of a desperate man beat a path to Eleanor's door … The adventure has been described as 'unputdownable', 'chilling', 'gripping' and variations to that effect.  Hopefully you'll agree.

Point number three: the romance. You know how these things usually go, where the main character and her hero meet in a chance encounter? The sparks fly and they just start to get along swimmingly and then something happens to cause a bust-up before, at long last, they finally work it all out? Well, in this book, we meet Eleanor after the bust up. The romance in her life is the acceptance of the past and coming to terms with it, and learning how to put her heart, and her feelings for the very enigmatic Matthew, back together again. I didn't set out to write it this way, but I really loved discovering how her sense of the past influenced her reactions now - now that she has the chance to begin again, if only she can weather the storm.

What was the best experience you had while writing In the Shadow of Winter?

I'm not entirely sure this can count as the best experience, but it was certainly the funniest. I noticed that when I got to a stage where I was writing a conflict or argument between the hero and Eleanor, I start to have silly little arguments with my real world partner. I kept getting angry with him and I couldn't quite tell him why, until I realised that somehow I was blaming him for the things fictional hero Matthew had done. Which is daft given that I was the author of Matthew's actions in the first place! Sometimes it is possible, I've realised, to empathise a little too much with one's characters ...

Very simply, the thing that surprised me the most was how willing people were to share their memories, and how different each person's perspective was of a major historical event such as that terrible winter.

I write at any time of day I can - it squeezes itself in with sheer determination around many other things. I have a fantastic desk upstairs with a window looking out over the very countryside that is my inspiration. If I ever lose my way, I just look out and there it all is, ready to remind me.

Absolutely I can. I'm working on one at the moment. The latest work is set in a similar period, but warm. Definitely warm. I can't face any more blizzards for now, even imaginary ones!

Sharing my thoughts on In the Shadow of Winter

There's a real sense of danger in this suspenseful novel which focuses on the events which happen in a small Cotswold village over a short period of time in the winter of 1947.

The end of the war has not brought prosperity for Eleanor Phillips, and as she ekes out a meagre living on her farm, she struggles to keep body and soul together. During a violent snowstorm Eleanor rescues a man who is clearly in need of shelter, but this man has secrets which will put Eleanor, her beloved farm and those closest to her in real danger.

What then follows is a beautifully written suspenseful story which reads comfortably, almost like Eleanor's memoir. You feel she is speaking just for you and in a few short words conjures a real sense of the freezing cold, the secluded isolation and the inherent danger. The mystery at the heart of the novel is well thought out and had me on the edge of my seat from the beginning. I really wanted everything to work out well for Eleanor and felt that she deserved some happiness.

I won't spoil any of the story by relating more of the plot as you really should read this for yourself to find out what happened. It's a perfect book to curl up, preferably with a huge pot of tea and some comforting homemade biscuits.

My thanks to Hayley Camis at Harper Impulse for my copy of this book.

And  also to Lorna Gray for her insightful answers to my questions and for sharing her book with Jaffareadstoo.