Review~ Shadow of the Raven by Millie Thom 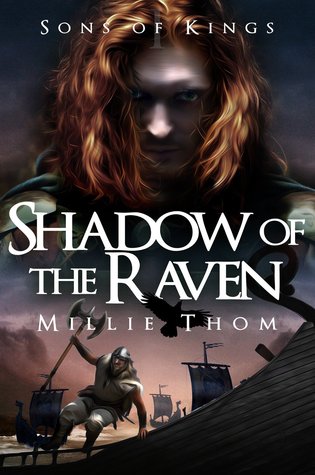 By the mid ninth century, Danish raids on Anglo-Saxon kingdoms have escalated. Several bands even dare to overwinter on the coastal islands, particularly those at the mouth of the Thames, where the kingdoms of Wessex and Mercia border each other.

The kings of these lands must put past enmity aside and take the first steps towards unity; steps they see as vital in the face of this newfound threat to their lands . . .

To be the sons of kings in the mid-ninth century was to be faced with the harsh realities of life. It was a time when enemies lingered in shadows and the crucial lessons learned were often tinged with both tragedy and danger and the ever present threat of invasion was never far away.

In Shadow of The Raven Millie Thom has brought this dangerous time to life in a story which abounds with all the frisson of high drama. From the kingdoms of Mercia and Wessex, to the lands of the Norse invaders, there is never a moment when the history and passion of the time doesn't draw you into a really good adventure story. The author does a commendable job of blending historical fact with fiction and throughout the story manages to keep control of a complicated and complex narrative.

As this is book one in a trilogy quite a lot of the early story is devoted to setting the scene and explaining where the individual characters fit into the narrative. This is done with fine attention to detail and it is obvious that the author has a passion for this period in history and uses her knowledge to good advantage. As the power struggles in this Anglo-Saxon game of thrones continues, it becomes obvious that the repercussions on the kingdom will last for centuries. I am sure that as this proposed  trilogy progresses, the fight for supremacy will continue to enthral.