with her latest novel 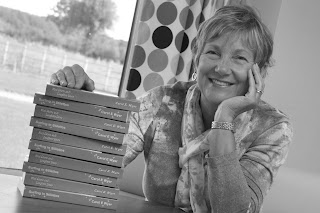 to celebrate her book

Writing the novel has always been the easy part for me. Titles are harder to come up with and covers are almost impossible for me to envisage. When I completed Just Add Spice, I was stuck for ideas for a cover. Since all my books have a silhouette on them of a woman I wanted to continue that theme so I eventually proposed the idea of a frumpy woman staring into a mirror in which she can see a fabulous wild and sexy silhouette of herself. If you read the book, you’ll know why I wanted to do that.

Safkhet Publishing were brilliant and set about drawing silhouettes for me to approve. They rustled up a spiffing version of what I had asked for. They liked it. I liked it. I was so excited that I made the mistake of showing Hubby it.

“Why is that woman in the picture waving a snake at the fat one?”

“It isn’t a picture. It’s a mirror. And...that isn’t a snake. It’s a whip. She’s a devilish woman, the opposite of the one looking at her. The one looking into the mirror wants to be more like her,” I patiently explained.

Hubby harrumphed. “Don’t like it,” he said sounding like a character from TV series Little Britain. “It doesn’t tell me anything about the book. Lose the snake,” he huffed and marched off.

I thought about it. Well, if he didn’t like it, maybe other men wouldn’t like it and wouldn’t buy it for their wives, so I emailed Safkhet Publishing. They were patient. They redid the cover. They got rid of the whip. They sent it off to a focus group who agreed it was obvious that the picture was a mirror, but to make sure people thought it was a mirror it was angled.

The final cover returned. It was a fabulous purple with black writing and a second one purple with white writing. Safkhet wanted to know which version I preferred. I was looking at them when Hubby loomed up behind me. “Don’t like those,” he said flatly. “Definitely don’t like those.” He glowered at the options, scrutinising each and scowling. “They aren’t very good.”

My hackles rose. How dare he make comment! What did he know about it, anyway? He hadn’t even read the book. The atmosphere became very hot as steam poured out of my ears. I stared at him. He glared back. “Well, I’m sure you can’t do any better!” I snapped.

I was wrong. He could do better. He did it almost immediately. This is his vision of what he believed the cover should look like. I have to admit, but don’t tell him I told you so...I love it.

Safkhet Publishing were extremely gracious and supportive. They didn’t get cross with me even though we changed the cover at the eleventh hour. They listened to Hubby’s suggestions and produced this. They couldn’t have been better. I owe them my sincerest thanks.

Next time, I’m going to ask Hubby to design the cover and leave him to it while I type. He really does add spice to my life (sometimes akin to hot chilli). Do you need some in yours?


There are some fabulous prizes on offer to celebrate Just Add Spice....
Here is the Competition entry form

In Just add Spice, the author has written an entirely believable story. You can very easily imagine that Dawn Ellis is someone you know - she could be that woman you see at the bus stop, or the one who queues in the sandwich shop just ahead of you at lunchtime, but what the story reiterates is that we are never quite sure about what goes on in the lives of those around us. With an uninteresting marriage and the prospect of dull reality, Dawn could have sunk so easily into the humdrum of middle age, but her interest in creative writing and the spicy life of her alter ego, Cinnamon allows Dawn to give full reign to her imagination.

I really enjoyed this warm and witty story, the author has captured both the reality of an uninspiring life and the way in which any life can be transformed by just adding a little bit of spice.