Blog Tour ~ Other Girls Like Me by Stephanie Davies

Delighted to host a stop on this blog tour
Till now, Stephanie has done her best to play by the rules—which seem to be stacked against girls like her. It doesn’t help that she wants to play football, dress like a boy, and fight apartheid in South Africa despite living in rural middle England as she struggles to find her voice in a world where everything is different for girls.
Then she hears them on the radio. Greenham women—an irreverent group of lesbians, punk rockers, mothers, and activists who have set up camp outside a US military base to protest nuclear war—are calling for backups in the face of imminent eviction from their muddy tents. She heads there immediately, where a series of adventures—from a break-in to a nuclear research centre to a doomed love affair with a punk rock singer in a girl band—changes the course of her life forever. But the sense of community she has found is challenged when she faces tragedy at home.
🌠 Enjoy this tantalising extract from Other Girls Like Me 🌠
From
Chapter One
FREE NELSON MANDELA The Specials
©Stephanie Davies
A CHILDHOOD IN St. Mary Bourne—an English village of thatched roof cottages winding along the banks of the Bourne River with its swaying water weeds, frogspawn, and fluttering ducks—was a childhood filled with wonders. I waded through fresh waters as the river rose anew from its barren bed each spring; swung across the river on tyres attached to ropes on summer nights; warmed my hands at autumn bonfires on golden evenings; and rolled in deep snow banks in the winter.
My family of six lived at the edge of the village, behind the flint schoolhouse adjacent to the primary school that my three siblings and I attended. There were eleven pupils in my year, with funny last names like Bone and Strange and Gibbons. We arrived in this peculiar land from the industrial north when I was six, my sister Kate was nine, my brother, Robert, four, with baby Sarah arriving not long after we did, bundled out of the ambulance one November afternoon and bustled into the bright kitchen for us to peer at in curiosity. People thought our Northern accents strange, but we soon lost them and became posh instead, never catching the lilting Hampshire accent that was so different from any I had ever heard.
Everything was different here. No lorries or buses rumbled past our front door, but instead there were fields and birds and horses wherever I looked, accompanied by the soothing sound of wood pigeons, hidden in trees. I lost myself in books and played classical guitar in the privacy of my attic bedroom, its slanted skylight revealing the stars, moon, and clouds in the changing sky. One evening at dusk, I watched spellbound from my bedroom window as two steaming bulls locked horns on the hill behind our house, the air visible from their flaring nostrils as they snorted and pounded the ground, dust flying. My father had landed a new job in what seemed like paradise.
But just fifteen miles away, a stretch of ancient common land, with jumping deer, bounding rabbits, and soaring kestrels, had been turned into an air force base that was soon to house the deadliest weapons ever held on our green and pleasant land: American cruise missiles, poised to strike against the Soviet Union. The first tiny signs came to us like the first buds of flowers in spring—first one American military family, then another, rented out cottages in the village; first one news piece, then another, announced the mounting support of our Prime Minister Margaret Thatcher for the United States President Ronald Reagan’s build up to war.
St. Mary Bourne may have seemed like an unlikely breeding ground for an activist. But by the time the cruise missiles arrived, I was ready for them.
About the Author
Photo credit : NYRA LANG
Stephanie Davies is a communications consultant who worked for many years as the Director of Public Education for Doctors Without Borders. A UK native, Stephanie moved to New York in 1991, where she taught English Composition at Long Island University’s Brooklyn campus and led research trips to Cuba. Before moving to New York, she co-edited a grassroots LGBT magazine in Brighton called A Queer Tribe. Stephanie earned a teaching degree from Aberystwyth University in Wales, and a BA in European Studies from Bath University, England. She grew up in a small rural village in Hampshire, where much of her first book, Other Girls Like Me, takes place.
Bedazzled Ink is dedicated to publishing literary fiction, nonfiction, and children’s books that celebrate the unique and under-represented voices of women.
Twitter @Stephanie5Davie #OtherGirlsLikeMe
Website
@BedazzledInk
@midaspr 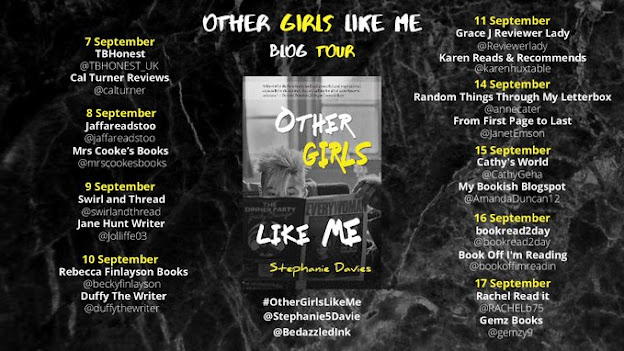