Blog Tour ~ The Other You by J S Monroe


Jaffareadstoo is delighted to be part of this blog tour

Kate used to be good at recognising people. So good, she worked for the police as a Super Recogniser, identifying criminals in crowds of thousands. But six months ago, a devastating car accident led to a brain injury. Now the woman who never forgot a face can barely recognise herself in the mirror.

At least she has Rob. Kate met him just after her accident, and he nursed her back to health, in his high-tech, modernist house on the Cornish coast. When she’s with him, the nightmares of the accident fade, and she feels safe and loved.

Until, one day, Kate looks at Rob anew. And knows, with absolute certainty, that the man before her has been replaced by an impostor. A doppelgänger. Is she right? Have her old recognition skills returned? Or is it all in her damaged mind?

Gripping, emotive, original and complex, The Other You is a psychological thriller that explores memory and identity, paranoia and pretence – and asks whether we ever truly know the people we love.

After a devastating car accident, Kate struggles to put the pieces of her life back togther, but she does so safe in the knowledge that her boyfriend Rob is going to be there for her and has her best interests at heart. Living in Rob's beautiful hi-tech house on the Cornish coast gives Kate the opportunity to rebuild her life, however, all is not well in this Cornish paradise and when some odd things starts to happen, Kate starts to look again at her relationship with Rob.

What then follows is a clever psychological suspense story that looks at the issues of trust and deception and which follows the trajectory of Kate's life very closely especially as she tries to understand a series of bewildering turn of events which threaten her safety. The story moves along at a cracking pace and I was soon gripped by what was happening in Kate's life. Her unique skill as a Super Recogniser, which is the ability to recognise individual facial characteristics from hundreds of random faces, is an absolutely fascinating concept, and the author works this, very cleverly, into the narrative.

The Other You is a fast action and pacy psychological suspense story which had me on the edge of my seat. I had no idea where the story was heading which makes the final denouement, when it comes, all the more terrifying. 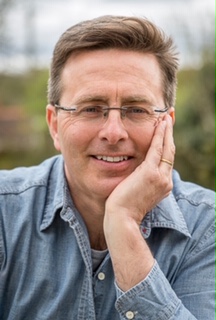 J.S. Monroe read English at Cambridge, worked as a foreign correspondent in Delhi, and was Weekend editor of the Daily Telegraph in London before becoming a full-time writer. His psychological thriller Find Me became a bestseller in 2017, and, under the name Jon Stock, he is also the author of five spy thrillers. He lives in Wiltshire, with his wife and children. 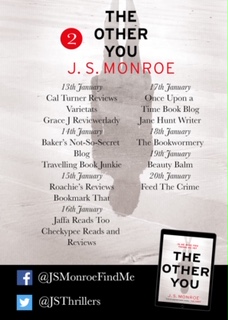