Delighted to be hosting today's stop on this Blog Tour

The only way is murder...

Lena Szarka, a Hungarian cleaner working in London, is forced to brush up on her detective skills for
a third time when her cousin Sarika is plunged into danger.

Sarika and her reality TV star boyfriend Terry both receive threatening notes. When Terry stops calling, Lena assumes he’s lost interest. Until he turns up. Dead. Lena knows she must act fast to keep her cousin from the same fate.

Scrubbing her way through the grubby world of reality television, online dating and betrayed lovers,
Lena finds it harder than she thought to discern what’s real and what’s just for the cameras.

Lena Szarka is a full time cleaner who works in London, however, her access into the fascinating lives of her clients also lends itself to Lena's other fascinating pre-occupation, which is that of part-time sleuth. Her occasional, and sometimes reluctant, helper is her cousin Sarika whohas recently become involved with a young man who is something of a reality TV star. When Terry Tibbs, Sarikas’s boyfriend, is found dead in a hotel in very suspicious circumstances, Lena has to put all of her sleuthing skills to good use in order to find out just what has happened to Terry.

What then follows is a light crime mystery which looks at the strange and unrealistic world of the ‘celebrity’ TV star, and of the depths that people will sink to in order to cover up a crime. The story is filled with all sorts of shenanigans and Lena has her work cut out in order to discover just what is going on in this strange world that she has inadvertently uncovered. I have enjoyed getting to know Lena, she's a feisty and determined heroine, and her, sometimes, unorthodox sleuthing skills made me smile. There's a quirky sense of atmosphere, and with more than enough twists and turns to keep you guessing, the story was entertaining right until the end.

A Messy Affair is the third book in the Lena Szarka series of mystery/crime novels and, whilst I think it would have been better for me if I had read this series from the beginning, I was able to quickly pick up the story, and I soon discovered that Lena’s idiosyncrasies are easily observed and her quirky personality is nicely explained. 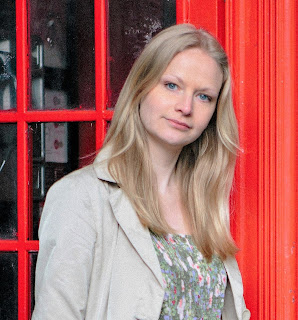 Elizabeth Mundy’s grandmother was a Hungarian immigrant to America who raised five children on a chicken farm in Indiana. Elizabeth is a marketing director for an investment firm and lives in London with her messy husband and two young children. She writes the Lena Szarka Mysteries, featuring a Hungarian cleaner as detective.