Blog Tour ~ All the Rage by Cara Hunter


History doesn't repeat itself. Does it?

A distressed teenage girl is found on the outskirts of Oxford. The story she tells is terrifying: grabbed off the street, a plastic bag forced over her head, then driven somewhere remote and subjected to an assault.

DI Adam Fawley is doing the best he can to investigate, but the teenager refuses to press charges. All he can do is try to ignore the sickening feeling he's seen something like this before...

But when another girl goes missing, Fawley knows his time is running out.

Because if he ignores the past any longer, this girl may not be coming back.

All the Rage sees DI Adam Fawley and his investigative team once again embroiled in a complicated and complex mystery which seems to have a foothold in the past, and yet, the situation in the present is very much central and pivotal to the story as a whole.

A teenager is found in a distressed state but when questioned Faith Appleford refuses to press charges despite the attack being extremely brutal. Faith has her own personal reasons for this lack of cooperation which further complicates an already difficult case. When another girl goes missing, DI Fawley realises that old secrets may well emerge in the race to bring the perpetrator to justice.

The story is suspenseful, dark and complicated and is everything, and more, from what we have come to expect from this series and this talented author. I've read the previous three books and thoroughly enjoy the way the author brings each of the characters to life, especially DI Fawley, who like all lead detectives, is something of a flawed character with a tragic past. However, Fawley is also a very realistic and believable character with an inbuilt integrity which shines through despite the appalling cases he, and his team, get to investigate.

All the Rage, as is usual with this series, had me trying to second all the way through, and just when I thought that I had the plot sussed, it would veer off in another unexpected direction so that I really didn’t see where it was heading, and that’s what makes this series so appealing. All the Rage has all the elements needed for a suspenseful crime read - complex, gripping, and totally unputdownable.

Cara Hunter is the author of the Sunday Times bestselling crime novels Close to Home, In the Dark and No Way Out, all featuring DI Adam Fawley and his Oxford-based police team. Close to Home was a Richard and Judy Book Club pick, was shortlisted for Crime Book of the Year in the British Book Awards 2019 and No Way Out was selected by the Sunday Times as one of the 100 best crime novels since 1945. Cara's novels have sold more than three quarters of a million copies worldwide. Cara Hunter lives in Oxford, on a street not unlike those featured in her books.

You can sign up for Cara's newsletter by clicking here 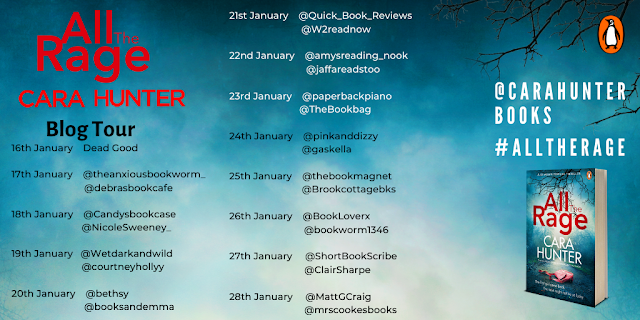