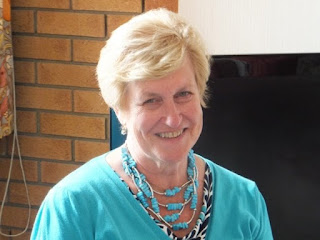 Ros - welcome to Jaffareadstoo and thank you for this fascinating feature about superstition during WW1....

Superstition for people in extreme conditions is common in many cultures and often linked to or is the antithesis of religion. For those in World War 1 when danger and discomfort were intense it was no different.

Some tales that are around are just that – old wives’ tales and it’s doubtful whether there is any truth. For example, one story suggests that soldiers believed they should enter an ambulance feet first if they were to emerge alive. There is nothing in old photographs to substantiate this as a practice in WW1 but such is the nature of superstition.

Being the recipient of the third match for lighting cigarette in the trenches is a very well-known superstition even to this day. The thought was that the first match would be spotted by the enemy, the second would enable him to aim and the third would be the one at which he shot thereby killing that soldier. Black cats were sewn into uniforms and Bibles carried in a pocket over the heart as protection from stray bullets. Red and white flowers were never put in the same vase in hospitals or at home because they signified blood and bandages. However, this may well be a much more ancient superstition since Romans are said to have scattered red and white flowers on graves.

For some years now I have been a collector of touchwuds or fumsups. These are tiny talismans that were first seen just before WW1 but became hugely popular during that conflict. They were given to soldiers by loved ones and worn on a watch chain or around a button.

They could be bought in gold, silver or brass and often had patriotic pictures of leaders of the time or flags on the back. 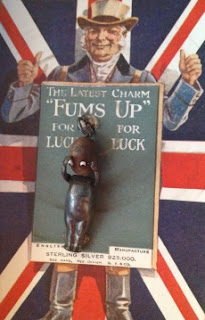 Usually the little arms were articulated to touch the wooden bead head. The little men had a four-leaved clover on the head and wings on the heels to bring the owner home with speed. 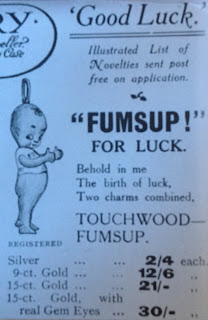 The poem inside the box that accompanied the little fellow reads:

Behold in me the birth of luck,
Two charms combined TOUCHWUD-FUMSUP.
My head is made of wood most rare.
My thumbs turn up to touch me there.
To speed my feet they’ve Cupid’s wings,
They’ll help true love 'mongst other things.
Proverbial is my power to bring
Good luck to you in everything.
I’ll bring good luck to all away,
Just send me to a friend today

There have been more modern versions issued. A set of little animals was brought out in the 1950s and a very recent replica was sold for an army charity.

One of these touchwud-fumsup is featured in my latest book when Rose sends hers to Michael as he enters the trenches of France just before the Battle of the Somme. I’m afraid you’ll have to read the book to find out whether it works its magic and brings him home safely. 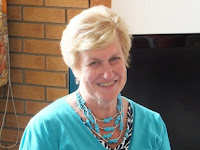 Having worked as a head teacher, Ros has been used to writing policy documents, essays and stories to which young children enjoyed listening. Now she has taken up the much greater challenge of writing fiction for adults. She writes both historical sagas and contemporary romance; perfect for lying by a warm summer pool or curling up with on a cosy sofa. Her books are thoroughly and accurately researched. This is her third book.

Ros is a member of the Romantic Novelists' Association and the Historical Novelists' Society.

She has lived in France for ten years but has recently moved back to the UK with her husband and dogs. Ros has two daughters and four grand-daughters, with whom she shares many heart-warming activities.

It's been a real delight to have you as our guest today.