Blog Tour ~ The Last Days of Summer by Vanessa Ronan

Jaffareadstoo is thrilled to be part of this exciting blog tour

The Last Days of Summer

After ten years in the Huntsville State Penitentiary, Jasper Curtis returns home to live with his sister and her two daughters. Lizzie does not know who she's letting into her home: the brother she grew up loving or the monster he became.

Teenage Katie distrusts this strange man in their home but eleven-year-old Joanne is just intrigued by her new uncle. Jasper says he's all done with trouble, but in a forgotten prairie town that knows no forgiveness, it does not take long for trouble to arrive at their door...

Hi, Vanessa, thank you for inviting us to be part of your blog tour and for taking the time to answer our questions about The Last Days of Summer....

Without giving too much away – what can you tell us about The Last Days of Summer?

THE LAST DAYS OF SUMMER begins as the convict, Jasper Curtis, is released from the Huntsville State Penitentiary to move in with his sister and her two young daughters far out on the Texas prairie. It is a story about a dark soul coming home and how this affects the family and the community. Told from four different points of view, it examines themes of forgiveness, redemption, and revenge.

It took me just under four years to write THE LAST DAYS OF SUMMER. That’s four years of people in my head whose thoughts I grew surprisingly used to. Oddly though, I’m not sure I feel that differently about any character than I did at the start of the novel. I am quite attached to each and was quite early on. I don’t always like what my character’s do. Don’t always agree with their viewpoints or the things they may say, but I suppose I love them somewhat unconditionally. Like a mother loves her children. As the characters grew in my head and gained strength, they took on a surprising independence I didn’t expect—each one said or did things at one time or another that I hadn’t planned! But I felt I had to ‘go with it’ each time because that was what Jasper would have done or Joanne would have said, so who was I to stifle their voices? That was my first experience where characters at times seemed to make their own decisions. Now, as I write my second novel, it has felt very strange having new voices in my head, seeing through new eyes.

Having been an eleven-year-old girl living on the edge of the Texas prairie, I guess the easy answer to this question would be to say that I identify with Joanne the most, but, after four years of living somewhat equally between multiple imagined minds, I have to say in all honesty that I identify with Lizzie, Katie, and Joanne in nearly equal measure. At different stages of my life different aspects of their personalities have resonated with me more. Jasper’s character is obviously the most far removed from my own world view; however, even he has moments of humanity that resonate with me. (I have to admit, as his creator, I have a real soft spot for him.) In many ways there are parts of me in each of my characters, but there are also aspects of each of their personalities that are the complete opposite of my own. That’s part of what’s fun about being a writer—we get to take the parts of ourselves we can use and mould and shape and reshape them till we see another self emerge.  A changed self, our opposite, unrecognizable yet somehow known. These fragments of the self add humanity to our characters making them opposites we can understand, can relate to. Can then bend to suit the needs of the story we are telling.

I am very, very much a start writing and see where it takes you sort of writer. I know the direction a story is going, know the general arch—where I’m starting, a few points along the way, have a vague impression of the ending, know the story’s tone—but room for spontaneity is incredibly important in my writing process. I often close my eyes visualize I am the character. Think, “Where am I now? What am I doing?” My scenes then unfold from there.

I like to read almost everything! Favourites include: All The Pretty Horses by Cormac McCarthy, The Fionavar Tapestry by Guy Gavril Kay, The Once and Future King by T H White, The Book Thief by Markus Zusak, Pedro Paramo by Juan Rulfo, Extremely Loud and Incredibly Close by Johnathan Safran Foer… I devoured the Harry Potter series. I love the old classics. I read a lot of poetry.

Cormac McCarthy, Isabel Allende, Tony Hillerman, and Larry McMurtry have been inspirations since I was young, as have the poets C. K. Williams, Sharon Olds, Silvia Palth, and Franz Wright. Winter’s Bone by Daniel Woodrell was a big influence. Leslie Marmon Silko’s Ceremony gave me the courage to keep my novel without chapters. Her description of her book as ‘a single telling’ really made sense to me.

I am writing my second novel. Another dark tale told from multiple perspectives, set into the fringes of society.

Author bio: Vanessa Ronan was born in Houston and in her 28 years has lived in Texas, Mexico, New York, Edinburgh, and Dublin, where she now lives with her Irish husband. Among other things, she has been a dancer, a PA, a barmaid, a literature student, a dance teacher, and now, a writer. Home-schooled by her literature teacher parents, Vanessa began writing as soon as she learned the alphabet. The Last Days of Summer is her first novel. 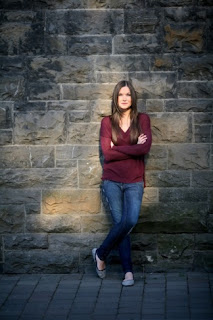 Huge thanks to the author and publishers for their invitation to be part of this blog tour. Do visit the other stops for more author/book content. 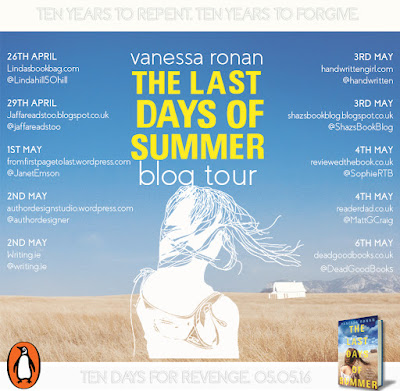