“The mosquitos haven’t recognised me yet, or the sun; I’ve become more foreign than native…my home is a tiny island in an enormous archipelago that isn’t even shown properly on maps of Columbia. Life here is a continual conversation between lethargy and longing…It’s the contrast I find amazing – the fact that there are so many islands in one.”
Rising gently from the crystal waters of the Caribbean Sea is San Andrés, an island whose ownership and history is fractured by geography, colonisation and burgeoning tourism. The novel centres on Victoria, whose own origins with San Andrés span generations and map these fragments, but her identity is contested by her accent, skin colour and years spent far away, living in Mexico City.
Now returning to the island she once called home on the wake of a broken relationship, Victoria is forced to reconcile the island she once knew with the one she now faces. Haunted by the memory of her parents and the ancestors that came before them, the island converges and crystalises around Victoria and she must piece together her own sense of belonging, understanding of herself and the possibility of a real future for herself and San Andrés.
Winner of Elisa Mujica Prize for Novels (Columbia, 2018) and now translated into English for the first time by ground-breaking publisher, Charco Press, and skilful translator Robin Myers, SALT CRYSTALS is a novel that “captures the essence of a spirit rarely explored in Colombian literature” (El Pais, list of the best 20 novels published in Colombia in 2019).
📖 My Review..
After many years of living in Mexico, Victoria returns to the island of San Andrés, in the Caribbean Sea, where she becomes reacquainted with the sights, sounds and scents of the island and shares with us her experiences and the painful memories which are evoked by her return to the place she once called home.
Salt Crystals is a story about searching for identity and as we become more involved with Victoria’s quest to discover more about her own family background so we learn about the history of the island and the political difficulties it is experiencing in the present. That the author was also born on San Andrés adds a special authenticity to this debut story and her connection to the place and its people is very evident.
Beautifully written and deeply descriptive, Salt Crystals is an interesting observation about life on this tiny island "Engrossed in the rhythm, I think, we're like the salt that makes the seas, simmering in the heat of a History as acidic as wound-healing vinegar. My abstractions evaporate. In this enormous womb, I know we're like salt crystals, refractory, luminous, mirrors for each other.."
In 2018 Salt Crystals won the Elisa Mújica National Novel Prize (Columbia). Beautifully translated by Robin Myers this is the first time the book appears as an English translation.
📖 Best read with ...fried breadfruit
About the Author
Cristina Bendek is a Caribbean author. She was born on the island of San Andrés (Colombia) in October 1987. In 2018 her first novel, Salt Crystals, won the Elisa Mújica National Novel Prize (Colombia). The novel has been translated into Portuguese (Moinhos, 2021), and Danish (Aurora Boreal, 2020), and now appears in English translation for the first time with Charco Press, which will also launch the novel in Spanish for the North American readership. Some of her work has also been translated into German. Cristina is also a journalist but spends her time researching Caribbean literature and writing fiction. She lives in Berlin.
About the Translator
Robin Myers is a New York-born, Mexico City-based poet and translator. Her translations have appeared or are forthcoming from the Kenyon Review, the Harvard Review, Two Lines, The Offing, Waxwing, Beloit Poetry Journal, Asymptote, the Los Angeles Review of Books, Tupelo Quarterly, and Inventory. In 2009, she was named a fellow of the American Literary Translators Association (ALTA); in 2014, she was awarded a residency at the Banff Literary Translation Centre (BILTC); and in 2017, and she was selected to participate in the feminist translation colloquium A-Fest. Recent book-length translations include Lyric Poetry Is Dead by Ezequiel Zaidenwerg (Cardboard House Press), Animals at the End of the World by Gloria Susana Esquivel (University of Texas Press), and Cars on Fire by Mónica Ramón Ríos (Open Letter Books).
About the Publisher
Charco Press is an award-winning independent publisher of top-quality contemporary Latin American literature in translation.
Shining a light on the rich array of fiction currently coming out of Latin America, Charco Press brings the region’s most exciting contemporary writers to new readers in the English-speaking world, publishing books that are entertaining, engaging and thought provoking. Charco Press meticulously seeks out the perfect translators to bring their authors’ work to life for English readers, often championing new and emerging translators, as well as established names.
Launched in 2017, Edinburgh-based Charco Press has already achieved international recognition, with one book longlisted and two shortlisted for the International Booker Prize, and the publishing house being named Scotland Small Press of the Year 2019 and 2021 at the Nibbies. Marking its fifth birthday in 2022, Charco Press has recently launched an English-first series, ‘Untranslated’, embracing texts by English-speaking authors linked to Latin American culture, as well as its first Spanish-language OriginalES edition
Twitter @cristinabendek #SaltCrystals
@charcopress
@midapr 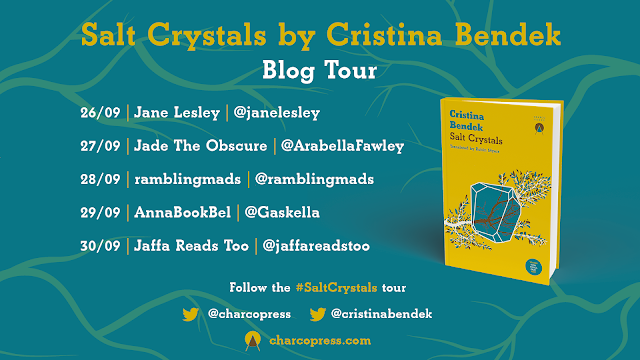