You think you know your neighbours.
But can you ever really know who’s telling the truth?
Jeannie Symonds is a force to be reckoned with – an eccentric, award-winning publisher, spending lockdown with her husband in a house near Kesterly-on-Sea. She seems to have it all: a high-flying career, a happy marriage, a niece she adores.
And then one day, she vanishes.
Cara Jakes is a new trainee investigator – young, intelligent and eager to prove herself. When she teams up with detective Andee Lawrence to look into the disappearance, she is determined to find out what has really happened to Jeannie. Cara begins to question the residents of this close-knit community, sure that someone has a secret to hide.
But how can she separate the truth from the lies?

📖 My Review...
Jeannie Symonds seems to have the perfect life, she's a successful publisher, has a handsome and charismatic husband, and lives in a beautiful property in Kesterly-on-Sea however, as we soon discover, this ideal life is far from perfect. When Jeannie disappears without trace her friends and family are all suspected of knowing far more than they appear.
Trainee investigator Cara Jakes and detective Andee Lawrence have their work cut out as they try to uncoil the interweaving stores which Cara's family and acquaintances seem to have constructed but trying to discover who is guilty of anything is just as baffling as Jeannie's mysterious disappearance. Over the course of this tightly knit story we travel back to the time before Jeannie's disappearance and then forward to the days after she's goes missing.  We get several perspectives from a group of unreliable narrators who all seem to have something to hide.
As always this talented author gets right into the heart of a small community. Kesterley-on-Sea is the type of town where everyone seems to know everyone else's business and yet when confronted no-one seems to be accountable for their actions. The undercurrent layer of mystery which runs throughout the story gradually builds up the tension, which is made all the more poignant for being set during the lockdown periods of the COVID-19 pandemic when people became more distrustful of those around them
Who's Lying Now is an intricate study into human nature - the suspicious, the ambiguous, the sensitive and the arrogant, all combine in a calculated mystery which kept me guessing from start to finish.
🍵Best read with... strong coffee and sugary doughnuts
About the Author 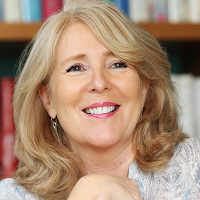 Susan Lewis is the internationally bestselling author of over forty books across the genres of family drama, thriller, suspense and crime, including I Have Something To Tell You, One Minute Later, My Lies, Your Lies and Forgive Me. Susan’s novels have sold over three million copies in the UK alone. She is also the author of Just One More Day and One Day at a Time, the moving memoirs of her childhood in Bristol during the 1960s.
Susan has previously worked as a secretary in news and current affairs before training as a production assistant working on light entertainment and drama. She’s lived in Hollywood and the South of France, but now resides in Gloucestershire with husband James, two stepsons and dog, Mimi.
Twitter @susanlewisbooks #WhosLyingNow
@fictionpubteam
@RandomTTours