A bittersweet comedy that takes a sidelong look at first love, mid-life crisis and the challenges of the relationship between fathers and sons .
With his 50th birthday approaching and his career in tatters, Peter Duffy is hard at work trying to repair his marriage when an invitation arrives in the post. Caitlin, one of his university friends, is having a party at the country house where he met his first love, the exotic Sanchia Page. If all his old friends are going to be there, there’s a slim chance that – just maybe – she will, too. Faced with this possibility, re-living his time with Sanchia threatens to turn his head and ruin all his good intentions. Set in the new Manchester of the 21st century and the old Manchester of 25 years before, The Former Boy Wonder takes a wry look at mid-life men and the women who have to live with them.
📖 My Review..
Peter Duffy is approaching fifty and his half decade is weighing heavily upon him as he reflects on the life he has now, and the imagined life he may have had if only his relationship with his first love, the beautiful Sanchia Page, had gone the way he hoped it would. When an invitation arrives with the possibility of getting together with the old crowd from his uni days, he desperately hopes, and secretly dreads, that Sanchia will be there too.
What then follows is a brisk skip back to the eighties when Peter was a student in Manchester and which incidentally, years late, he still calls home. We meet the uni crowd, understand Peter's fascination for Sanchia, and with considered perception we start to understand the angst which Peter has carried with him ever since he was abandoned as a ten year old in Northern Ireland when his father left him to pursue his own career.
There is much to enjoy in the story, parts of it made me smile, Peter, for all his melancholy moods is actually quite a likeable guy and I warmed to his story as he traversed Manchester, a city I know well. The flashbacks are done well and blend nicely with Peter's experience as he tries to understand where his life is heading. I felt enormous sympathy for Lucy, Peter's wife, who seems to be the only one keeping things afloat as Peter wallows in nostalgia.
The Former Boy Wonder is a fascinating glimpse into the trials and tribulations of growing older, the unhappiness of living with regret, disappointment at fatherhood and not realising what you have until it's gone.
📖 Best Read with .. a proper cup of builder's tea
About the Author
Robert Graham is the author of the novel Holy Joe; the short story collections The Only Living Boy and When You Were a Mod, I Was A Rocker; and the novella A Man Walks Into A Kitchen. His play about fans of The Smiths, If You Have Five Seconds To Spare, was staged by Contact Theatre, Manchester. He is co-author, with Keith Baty, of Elvis – The Novel, a spoof biography; and, with Julie Armstrong, Heather Leach, Helen Newall et al, of The Road To Somewhere: A Creative Writing Companion; Everything You Always Wanted to Know About Creative Writing; and How To Write A Short Story (And Think About It). He grew up in Northern Ireland and for most of his adult life has lived in Manchester. He teaches Creative Writing at Liverpool John Moores University.
For more information please see www.robertgraham.life and follow Robert on Instagram @robert55graham
Twitter @LendalPress #TheFormerBoyWonder
@kenyon_isabelle 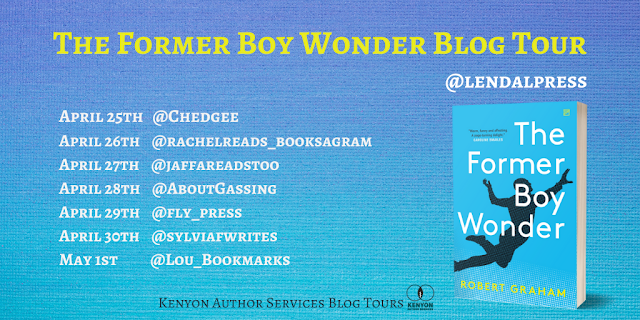