Diana Beauleigh is caught between two men.
Seven long years ago, Jack Carstares, the Earl of Wyncham, sacrificed his honour for his brother and has been in exile ever since.
Returning to England, Jack pretends to be a gentleman named Sir Anthony Ferndale but makes his living in a most ungentlemanly fashion, as a highwayman and a gambler.
When Jack encounters his nemesis, the Duke of Andover, in the midst of kidnapping Diana Beauleigh, the two old enemies come to blows.
Can Jack save the beautiful Diana from rakes, kidnap and ruin…?
📖 My Thoughts..
It's 100 years since the first publication of The Black Moth and it is safe to say that the Regency novels of Georgette Heyer are every bit as popular today as they were back in 1921 and to celebrate the event there is a beautiful 100th anniversary edition.
It's been interesting to step back in time to revisit The Black Moth, which I first read far too many years ago when I was in my mid teens. The story is as enticing as I remember with characters who leap off the page and with a Georgian setting which is so reminiscent of the period it's as though Georgette Heyer is actually sitting writing at her escritoire in the mid-eighteenth century rather than the early twentieth.
The mood is captured instantly with the tale of two brothers, the elder, Jack Carstares sacrificed his own reputation in order to save the family honour and protect his younger and more irresponsible brother but when Jack, now Earl of Wyncham, returns from exile he discovers his old adversary, the Duke of Andover, is about to abduct, Diana Beauleigh a society beauty. From card games, to sword fights and with a little swashbuckling highwayman in between, The Black Moth is a great romp through the great, and the good, of Georgian England.
Interesting to think that Heyer wrote The Black Moth when she was in her early teens, ostensibly, to amuse her younger brother who was sick at the time. It certainly sets the course for her future writing career which lasted until her death in 1974. 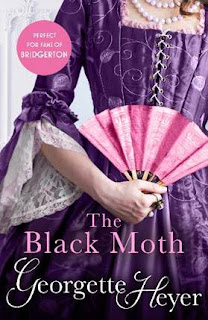 About the Author
Author of over fifty books, Georgette Heyer is the best-known and best-loved of all historical novelists, who made the Regency period her own. Her first novel, The Black Moth, published in 1921, was written at the age of seventeen to amuse her convalescent brother; her last was My Lord John. Although most famous for her historical novels, she also wrote eleven detective stories. Georgette Heyer died in 1974 at the age of seventy-one.
Twitter #GeorgetteHeyer
@ArrowPublishing
Amazon  currently priced at 99p 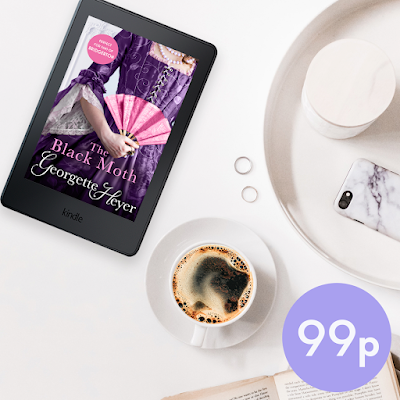