Rhona MacLeod digs up secrets from the past in the fifteenth novel in Lin Anderson’s forensic crime series, as she must solve the case of a young girl who went missing forty-five years ago.
The present-day discovery of a child’s remains in a peat bog south of Glasgow may finally solve the decades-old mystery of eleven-year-old Mary McIntyre’s disappearance. Called in to excavate the body on the moor, forensic scientist Rhona MacLeod uses the advances made in forensic science since Mary’s vanishing to expose a horrific secret that tore apart an entire community.
Karen Marshall had been devastated by her best friend’s abduction on the day of her confirmation. Questioned by the police but traumatized by the loss of her friend, nothing Karen remembered back then had helped.
Now, decades later, the news of the possible discovery of Mary’s body brings the nightmares back. But added to that, memories long-buried by Karen are returning, memories that begin to reveal her role in her friend’s disappearance and perhaps the identity of the killer.
The Innocent Dead moves between the past and the present: those who sought and hid the truth back then, and those intent on discovering it now…

What did I think about it..
Even though The Innocent Dead is the fifteenth book in this forensic crime series I didn't feel disadvantaged by coming as a newbie to Rhona MacLeod's style of investigating, in fact, I found the story really easy to pick up and enjoyed the way everything evolved really quickly. The rather spooky nature of the opening chapter certainly set the scene for a story which grips from the beginning.
Picking up a murder mystery which happened some forty-five years ago means that the advance in forensic science and DNA profiling reveals clues which were never visible in 1975, and that's what makes this investigation such a complex one. Forensic scientist, Rhona MacLeod and her intrepid assistant, Chrissy McInsh, are determined to, quite literally, leave no stone unturned in the quest to find the killer of eleven year-old, Mary MacIntyre, even if it means upsetting the community where she lived all those years ago with her family, and where she once played in the woods with her best friend, Karen .
I've really enjoyed meeting with the investigators who make this story such a treat to read, from Rhona and Chrissie, through to the detective duo, DS Michael McNab and DS Janice Clark, there is never a moment when the story doesn't pull you in, or fire your imagination so that you are tempted to read just a little bit more even though you know you should be doing something else.
Complex, beautifully written and with just enough creepiness to make you jump at shadows, I raced through The Innocent Dead in a couple of sittings. It's perfect escapism, wonderfully crafted and so addictive I think I will just have to start at the beginning and read the series in order.
About the Author
Lin Anderson is a Scottish author and screenwriter known for her bestselling crime series featuring forensic scientist Dr Rhona MacLeod. Four of her novels have been longlisted for the Scottish Crime Book of the Year, with Follow the Dead being a 2018 finalist. Her short film River Child won both a Scottish BAFTA for Best Fiction and the Celtic Film Festival’s Best Drama Award and has now been viewed more than one million times on YouTube. Lin is also the co-founder of the international crime writing festival Bloody Scotland. 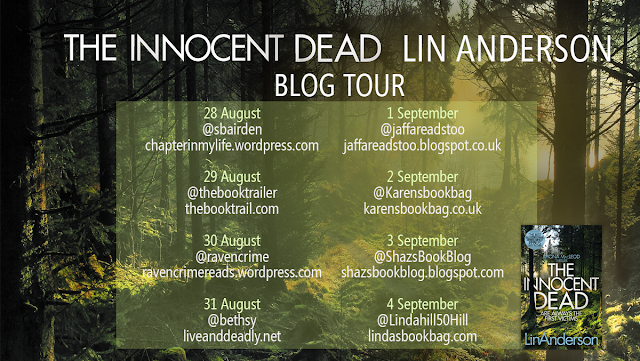