It is 1943, and a month into their service as Land Girls, Bee, Anne and Pauline are dispatched to a remote farm in rural Scotland. Here they are introduced to the realities of 'lending a hand on the land', as back-breaking work and inhospitable weather mean they struggle to keep their spirits high. Soon one of the girls falters, and Bee and Pauline receive a new posting to a Northumberland dairy farm. Detailing their friendship, daily struggles and romantic intrigues with a lightness of touch, Barbara Whitton's autobiographical novel paints a sometimes funny, sometimes bleak picture of time spent in the Women's Land Army during the Second World War.
What did I think about it..
I had an aunt who spent time during WW2 as a Land Girl, she was stationed on a farm in Castle Cary, in Somerset, and always said that, although the work was physically challenging, she had a great time. One of the best things she learned was how to French braid a horse's mane which was really useful whenever I needed my hair plaited.
In Green Hands we follow the fortunes of  the Land Girls, Bee, Anne and Pauline, and from their awful back breaking challenge of picking mangold wurzels on a truly inhospitable farm in rural Scotland, to their more pleasant experience of working on a Northumberland dairy farm, there was never a dull moment. That the work was physically challenging was never in doubt but I think what truly comes across is the sheer bravado and solid determination of the land girls to succeed in a world which was very different. Keeping their femininity intact, whilst knee deep in muck, was a real challenge but the added touch of  a bright scarf or a dash of red lipstick helped to keep their morale high, and good food, especially cake, lifted their spirits.
Based on the author's own experiences of being in the Women's Land Army, reading Green Hands has been like stepping back in time, and the experiences of Bee, Anne and Pauline are brought to life in a way that modern writers of historical fiction don't always succeed. There's nothing like writing about what you know, and Green Hands was written by Barbara Whitton in 1943. In the introduction to the book, we are told that she wrote the first draft of the story in a week, it would seem that the author's Land Army experiences were so vivid that she couldn't wait to put pen to paper!
I'm so glad that the author wrote this fictional account her time in the Women's Land Army,  I've enjoyed every well written word.
About the Author
MARGARET HAZEL WATSON (writing under the pseudonym Barbara Whitton) was born in Newcastle-upon-Tyne in 1921. She was educated at the Church High Girls School in Newcastle, and later sent to St Leonards School in St Andrews. Due to study Art in Paris, her training was curtailed by the outbreak of the Second World War. Having volunteered for the Women's Land Army (WLA) in 1939, she worked as a Land Girl for around a year before moving to the First Aid Nursing Yeomanry (FANY) and later joining the Auxiliary Territorial Service (ATS) as a driver, where she remained for the duration of the war. Her novel Green Hands is a fictionalised account of her time spent as a Land Girl, detailing the back-breaking hard work and intensity of her experience with good humour and an enchanting lightness of touch.
During her time with the ATS she met her husband Pat Chitty and they were married in 1941. After the war, she wrote a number of accounts of her wartime experience and retained an interest in art, literature and horticulture throughout her life. She died in 2016.
Twitter @I_W_M #wartimeclassics
@angelamarymar
@RandomTTours 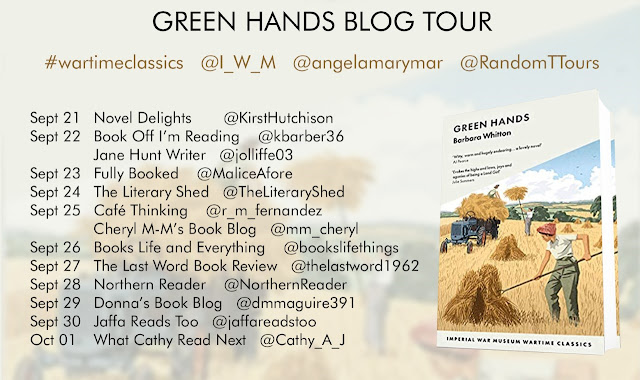