The author in my spotlight is ....Martine Bailey 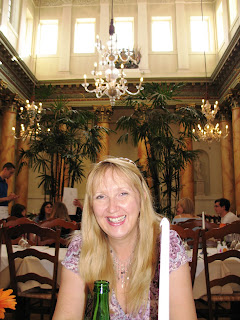 Hi Martine and a very warm welcome to Jaffareadstoo and thanks for being our author in the spotlight today...

Where did you get the first flash of inspiration for -The Penny Heart?

Hi Jo. Well it's a bit of a story as in 2011 my son Chris and his partner were caught up in the Christchurch earthquake. Though they were thankfully unharmed, my husband and I flew out there to see them and have a long working holiday. For our first year, we house-swapped on New Zealand's East Cape, with an ocean view of the Pacific. One day I was walking on the empty beach and thought about life across the Tasman Sea in Botany Bay in Australia, where the British had set up a prison colony in 1788. Meanwhile, my husband was teaching Maori students, descendants of the original inhabitants of my new hometown. I had already glimpsed their strong traditions of singing, tattooing and celebration, and explored the remains of some stockaded fortresses on our street. 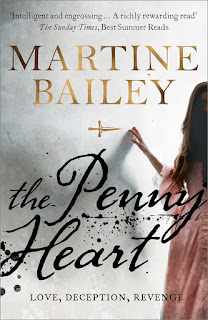 I then discovered Penny Heart convict tokens or 'leaden hearts', made by British convicts and now collectors' pieces in Australian museums. They were smoothed copper pennies engraved with messages for loved ones about to be transported from Britain on the Georgian equivalent of a trip to the moon – with just as little prospect of returning home. 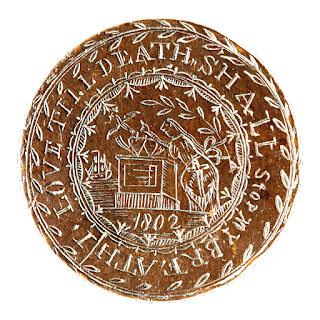 Many Penny Hearts have messages like 'When this you see, remember me,' but as well as pain at separation, some communicate real anger and defiance. The women's images particularly intrigued me: one shows a woman releasing a dove towards a transport ship, beside an anchor of hope and reads 'I Love till death, shall stop my breath'.

In The Penny Heart, my character Mary, has a penny token engraved at Newgate prison with a rhyme that is part promise, part threat:

Though chains hold me fast,

As the years pass away,

I swear on this heart

To find you one day

It is the story of two women with hugely different backgrounds and characters whose lives collide as a result of the Penny Heart. It is partly told by Grace, a sensitive and artistic young wife who finds herself at isolated Delafosse Hall, horribly attracted to her indifferent and selfish husband. The other main character is Peg, her housekeeper, a clever cook and - the reader realises - an escaped convict and talented confidence trickster. I wanted to look at a mistress and servant relationship from a darker perspective than in An Appetite for Violets, and take envy and revenge as far as I could go.

Yes, I did live with my characters all through my twenty months in the Antipodes and beyond. My two women characters both developed and mostly I was surprised and pleased with the way they turned out. Grace, the mistress of Delafosse Hall, was harder for me to write as she starts out as terribly naive and gullible. Mary arrived almost fully formed in my head, as highly motivated and very dangerous. I see part of my job in writing novels as taking emotions to extremes, and this involved racking up the tension in a series of confrontations until only one woman could succeed. Now the book is finished I'm surprised at how hugely both women grew from my first sketches, and what an emotional rollercoaster it was.

Superficially, I'm more like Grace – quiet and artistic. But then again I'm more determined than people would ever think, and very interested in justice and fairness, and sympathise with the underdog. Both of them have their troubles but clearly the balance of fate weighs more heavily against Mary, as she is poor and parentless in a brutal society. I had to draw on different parts of my personality to write them both, but like many readers, I truly admire Mary's courage and pluck. One of the questions in my Reading Group Guide is about how readers feel about the ending. More than one murder has been committed, but whether justice has been done remains a matter of debate.

Your writing is very atmospheric – how do you ‘set the scene’ in your novels and how much research did you need to do in order to bring the place and people to life?

I love research about the way people used to live, old country houses, fashion, and everything from servant hiring fairs to elegant York Assemblies. I find it very useful to literally 'set the scene' by choosing a location and then sketch room plans, and make a pin board or use Pinterest. Delafosse Hall, the dilapidated manor where much of the action takes place, is based on a once abandoned Jacobean house called Plas Teg, near where I live on the Welsh border.

The opportunities to shop in the 1790s surprised me, that women like Grace could choose furniture, wallpaper and fabrics at home from pattern books of beautiful objects. A star day for me was going to Berrington Hall, which contains many of the National Trust's historic costumes and gasping over the beautiful silks and embroideries.

At the other end of the social scale, I'm also addicted to reading criminal trials, especially when I can catch people's voices in authentic transcripts. For example, the inquest and letters from Australia at the end of the book are loosely based on reports in The Times from that period.

And finally …can you share with us anything about your next writing project?

My current work in progress is an intricate murder mystery set in an English village. My research so far has sent me looking at the impact the seasons, traditions and rituals of country life. To get into the mood I recently went to the Acton Scott Museum, where the BBC's Victorian Farm was filmed. I had a lovely time pretending to be a 'Farmer's Wife', dressing up and making butter, feeding lambs and sewing around the table. When my worldly heroine is stranded in the village after a robbery, she combines forces with a mysterious hack writer and together they solve a series of riddles and enigmas. I am loving writing it.

The Penny Heart is a Sunday Times Summer Read and is available from Hodder Books in paperback from the 28 July 2016. It is also published by St Martin’s Press in the US as A Taste For Nightshade.

More about The Author 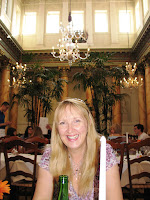 Open to UK residents only


Huge thanks to Martine for spending time with us today and for her generous giveaway. It's been great fun learning more about the inspiration for The Penny Heart.

You can see my review of this fabulous story here. 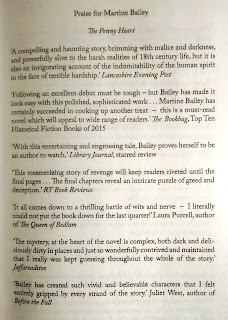