Jaffareadstoo is excited to be part of the Sacrifice Blog Tour

In her very first case, criminal psychologist Lena Peters is confronted with a killer on a murderous vendetta. And though she is unaware, Lena will play a prominent role in his deadly mission. Lena knows what makes killers tick and all about obsession, for she has been close to the edge herself. But soon she will become the hunted…

My thoughts about Sacrifice..

The suspenseful ending of the book certainly lends itself to a continuation.

Lena Peters is a criminal psychologist who has been drafted into an ongoing investigation into finding a serial killer who seems to be targeting young women and killing them in the most macabre way. In order to justify her presence within the investigative team, Lena must first try to find her own place within it, which, at first, seems a little awkward.

This is the first book in a proposed series, so there is bound to be a certain amount of scene setting, and as with any new psychological crime story it takes a little while to get to know and understand the characters. However,  once I started to become more involved in the plot, I found that the story became interesting, and the short chapters certainly help to maintain the overall energy of the novel.

Overall, I think that the author has started off the series nicely with a story which is both suspenseful and intriguing. It's always interesting to have another look at how a criminal psychologist works and I am sure that Lena Peters will grow in strength as she starts to become involved in other stories. The ending of Sacrifice lends itself to a continuation.

Best read with …a glass of whisky and a cuddle for Napoleon the cat.

Hanna Winter is the pseudonym for Eva Rehberger who is a hugely successful catwalk and fashion model in her native Germany. Hanna Winter's first thriller, THE CHILDREN'S TRAIL (2010), became an instant bestseller and Sacrifice has sold over 30,000 copies in Germany since first publication in 2012 – this is the first time it’s been available in English. The ebook of Sacrifce is just published and the paperback is due to be published on the 17th November 2016. The former German model has since published six novels under several pen names. Sacrifice has been received with critical acclaim. 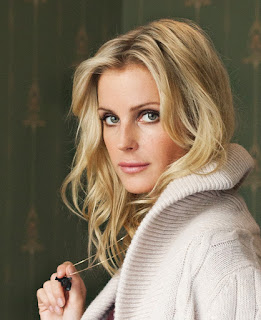 Thanks to the publishers for the invitation to be part of this blog tour.