Welcome to Jaffareadstoo, Heidi and thank you for being our guest today and for sharing your debut novel Beneath the Surface with us..

Where did you get the first flash of inspiration for Beneath the Surface?

It was a couple of years ago when I remembered this odd fear I had as a child of suddenly wondering what would happen if my mum turned out to be someone else and not who I thought she was. The thinking behind it was how would I cope if someone I trusted so implicitly did something completely out of character? Out if this idea for Beneath The Surface was born - though of course was happens to Abi is much worse!

It’s a story of a dysfunctional family and the impact of their actions on each generation. Abi comes home and finds that not only has her mum vanished she has taken the two youngest sisters with her. Fourteen years on she starts unravelling the past with the hope of finding a future for herself. As she does this we also see the story of her mother and the girls - who are now teenagers - and realise that history is threatening to repeat itself.

Sometimes but not always. Sometimes they completely surprised me and this was a good thing because it meant they had really developed whilst I was writing them. I had an idea of how I wanted them to be perceived by readers although everyone sees them differently and it has been so interesting hearing feedback. The characters in Beneath The Surface have got people talking a lot!

That’s a tough one because I don’t think I am that similar to any, though I would probably have to say Abi, and possibly Hannah. Hopefully no one would say I have many similarities to the mother or grandmother!

Definitely start writing and see what happens! I don’t think this is always the most productive way of writing though as for me it means a lot of re-writes and plotting and re-structuring mid-way through. But I am not the kind of person who can sit down before I have begun and meticulously plan out what is going to happen. I am too eager to start writing!

Yes I do, absolutely. I love novels with lots of twists, I love psychological thrillers and dramas. Over the years I have been influenced by many writers but I particularly love Liane Moriaty and Rosamund Lupton. I read so much and always make sure I pick up whatever is big at the moment. I have just finished Behind Closed Doors, and am now reading The Teacher.

I am now editing my second book. It is about a young girl who goes missing whilst being looked after by her mother’s friend. The story is told in the alternating voices of the mother and her friend. Despite finding it a hard subject matter I’ve loved writing this one too and can’t wait for it to come out!

My thoughts on Beneath the Surface...

Imagine being sixteen and coming home from school to find that your mother and baby stepsisters have disappeared from the family home, leaving no trace of where they might have gone. Trying to make sense of this disappearance would be beyond the comprehension of most people and for Abigail Ryder the devastating truth of abandonment is something that will shadow her throughout the rest of her adolescence and early adulthood.

After the initial disappearance we meet up with Abigail some fourteen years later when she partnered with Adam and they are considering having a family of their own, and that’s when the past in all its frightening reality comes back to haunt Abi. The intervening years haven’t been without incident for Abigail’s mother and younger sisters and the story of what happened to them forms a good percentage of the story.

This tightly drawn suspense story grabs your attention from the beginning and what then follows is a cleverly constructed psychological profile of a family at odds with themselves, who are so full of secrets and lies that it’s difficult to know exactly where the truth is going to come from. It’s quite an emotional read in places, and the convoluted relationship between mothers and daughters becomes as much the focus of the story as the story itself. To say more would be to spoil the impact of the story and that would be such a pity as the story should be read with no spoilers from me.

The author writes well, with a fine eye for detail and the subtle references to family life, particularly in the choice of dialogue Abi has with Adam, and also in the sibling relationship between Hannah and Lauren, Abi’s younger stepsisters, I thought was particularly well done. I found the book to be a quick read, quite simply because, once started I couldn't put it down, and there's always that enticing need to discover just a little bit more. I really enjoyed trying to second guess what the outcome of the story would be and hoped that everything was going to work out well. Whether it does, or not...you'll have to discover for yourself !


Beneath the Surface is a commendable debut novel from a fresh new talent and I look forward to seeing what’s coming next. 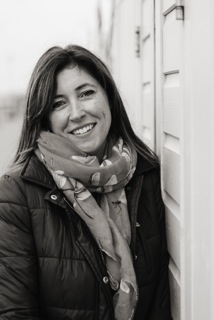 
Huge thanks to Heidi for being such a lovely guest and for sharing Beneath the Surface with me.