I am delighted to welcome Annemarie Neary to Jaffareadstoo and to congratulate her on the publication of her second novel.

A warm welcome to you Annemarie and thank you for spending time with us today...

Tell us a little about Annemarie Neary, author.

I’m about to publish Siren (my second novel, but my first psychological thriller), which is coming out on 24th March; I signed a 2-book deal with Hutchinson, an imprint of Penguin Random House UK, last year. My first novel, A Parachute in the Lime Tree, was published by The History Press Ireland in 2012. I also write short stories, I’m working on a tricky first draft of one at the moment.

I first started writing seriously in about 2008. I took an extended career break when my 3rd son was born, and I’d been back at work for about 2 years when it became obvious that the whole juggling work/home thing wasn’t going too well. I conceded defeat, stopped work, then felt like a bit of a failure. I realized then that if I was ever going to write, this was the moment. I developed the habit of working to competition deadlines — write, edit, send, repeat — until I started to get somewhere.

Place is a big factor for me, especially when it comes to short stories. It’s important is to be open to things; observe, eavesdrop, wonder about people, take notes when you can. Also, if you come across something that piques your interest, try to catch it before it disappears — pin it down in some form, even if it’s only a note on your phone. And don’t be afraid to combine disparate things – often that’s where the interesting stuff begins.

What inspired you to write Siren , and what can you tell us about it that won’t give too much away?

I find the genesis of ideas a bit of a mystery, and one I hesitate to interrogate too closely in case the ideas stop coming! With Siren, I began with a short story that centred on the protagonist, Róisín, during a night out that goes unimaginably wrong. For the moment, that was that. But even though the story was finished, I couldn’t let Róisín go. I became fascinated by the potential ramifications of that night. What would Róisín’s future hold?

Deadlines are good! Having a book published is an exciting, exhausting, anxiety-provoking business; it’s also quite addictive. Having said that, writing has become so integral to my life that I’d write even if I weren’t being published. The great thing about writing is that nothing need ever be wasted. Every frustration, boredom, sorrow and joy can be turned to use.

It depends whether I’m writing raw or editing. I find writing new material quite a difficult process. I’m never sure whether something is going to work until I’ve found the shape of it, and that’s often not until I’m quite a way in. I tend to be a night owl, so I love to write late at night when everyone else is asleep. A lot of people say you should write your raw material first thing in the morning while you’re still adjusting to the day, almost in dream mode. Colm Tóibín says to ‘Stay in your mental pajamas all day’ which might be a bit of an ask for those of us with jobs and families! However, the vast majority of my writing work constitutes editing, so that can be done any time.

What do you hope that readers will take away from your books?

That’s a very interesting question, and not one I’ve thought about before. I don’t know that I do have something I want readers to take away, partly because every book or story is different, and partly because I’m not directing my characters to behave in any particular way. I place them in peril or temptation or in the midst of a moral dilemma and they cope according to their personalities, desires, needs.

In Siren, Róisín reaches a crisis in early middle age that leads her to do something that is brave and foolhardy but absolutely essential for her emotional and moral wellbeing. I suppose I’m interested in courage, and what it takes to behave well in extreme situations. In fact, It’s just occurred to me that both Róisin in Siren and Oskar in Parachute fail to act with courage at a particular point of crisis then spend the rest of the book determined, if not to replay things, to do better next time.

Thanks so much for your questions, Jo, and for inviting me to the blog.

It's been a real pleasure Annemarie, do come back and see us again soon...

Irish-born, Annemarie was educated at Trinity College and King’s Inns, Dublin and the Courtauld Institute, London. A former lawyer, she lives in London with her husband and sons.

Annemarie’s short fiction has won awards in the UK, Ireland and the US. Her UK debut, Siren, is forthcoming from Hutchinson (Penguin Random House UK) in Spring 2016. A Parachute in the Lime Tree was published by The History Press Ireland in 2012. 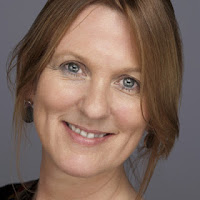