Review ~ The Killing of Polly Carter by Robert Thorogood

Well, I feel like I have come rather late to the Caribbean murder mystery party as I have to hold my hands up and say that I haven't watched even a smidgen of the BBC1 hit series, Death in Paradise.

The Killing of Polly Carter, for those familiar with the TV series and who may have read book one in this series, A Meditation on Murder, will be entirely familiar with the crime team, who in the books, are led by the hapless Richard Poole, who has been sent to solve crime on the island, disliking sun, sea, sand, insects and a variety of other stuff commonly found in this idyllic part of the world.

So, with no preconceptions of the style of Death in Paradise, I started to read and very quickly became immersed in a story which was as delightfully quirky as any Agatha Christie novel. At the very start of the story, ...and I'm giving away no spoiler here, the eponymous Polly Carter is discovered dead, in what appears to be a classic suicide, but as Richard Poole and his team are about to discover, there is more to the killing of Polly Carter than first appears.

What then follows is a classic whodunit; with more than enough twists and turns to keep you guessing. So many times I thought that I had discovered who was responsible for Polly’s death, only for the investigation to veer off in another more convoluted direction. For those with prior knowledge of both the place and its people will, I am sure, recognise the subtle nuances which this author describes so well.  The dynamics between the crime team are wonderfully entertaining and the added complication of the arrival of Richard’s mother to the island allows a glimpse into Richard’s background and perhaps sheds some light on the reason for his delightful quirkiness.

I really enjoyed this story and will certainly back track to read A Meditation on Murder, whilst eagerly waiting for the next series of Death in Paradise to be shown on the BBC in 2016.

Best read with a tall glass of rum punch and some tasty seafood...

Robert is the creator of the BBC1 hit show Death in Paradise. 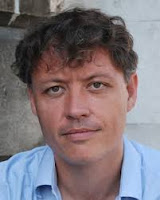