is the 450th anniversary

of the birth of 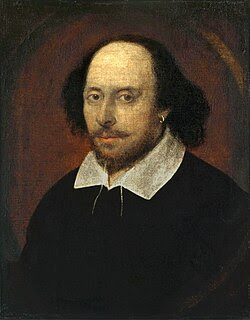 
Whilst the actual date of Shakespeare's birth is not known, it has been assumed that he was born on or around 23rd April. His baptism date is given as the 26th April 1564. Born and brought up in Stratford-upon -Avon, Shakespeare married Anne Hathaway at 18 and had three children, Susanna, and twins Hamnet and  Judith.

By 1585-1592, Shakespeare was in London making a career as a writer, playwright and part owner of a company of players, known as The Lord Chamberlain's men, later known as The King's Men.

Producing most of his work between 1592 -1613, he at first wrote comedies and histories, but by the end of the 16th century he was writing tragedies and tragicomedies and was collaborating with other playwrights.

He died in 1616 and is buried at the Holy Trinity Church Stratford-upon-Avon and is also commemorated at Poet's Corner in Westminster Abbey, London.

I recently reviewed two books which feature William Shakespeare as one of the leading characters.

Aemilia Bassano, the daughter of an impoverished court musician, uses her intelligence and her considerable beauty to make her way amongst the upper echelons of Elizabethan high society. As the mistress of Henry Carey, Lord Hunsdon, the patron of Shakespeare’s theatre company, Aemilia, is soon noticed by the charismatic playwright William Shakespeare, and it is this abiding love/hate relationship between Shakespeare and Aemilia which is the real focus of the story. There is much debate about the identity of the mysterious ‘Dark Lady’ who features in the sonnets of William Shakespeare. This novel cleverly explores the alleged fascination which the playwright had for Aemilia Bassano, and it is entirely possible that she could have been muse and his one true love.

This imagined autobiography of the life of the eminent bard starts as William Shakespeare, on his death bed, attempts to exit this mortal coil by recounting his life story to his lawyer Francis Collins. Making sense of this enigmatic playwright’s life and times is no easy feat and the author has done a commendable job in fleshing out the details of Shakespeare’s life from his early childhood in Stratford, through to adulthood amongst the glittering court world of Elizabethan politics and Jacobean skulduggery.

There is no doubt that the author has done his research extremely well and has unearthed snippets of Shakespeare’s life which shows that the bard lived a colourful and extremely lively existence. There are some lovely descriptive accounts of both Elizabethan and Jacobean England when the glittering prose really does leap off the page and by leaving nothing to the imagination the sights, sounds and smells of the era really do come gloriously alive.

There is a compelling lyricism to the narrative which is rather poetic and it certainly has more than enough historical content, in fact, there were times when I forgot that the book was a novel as it is presented more like a non-fiction account and some of the lovely literary prose is achingly reminiscent of some of Shakespeare’s own writings.

I’m not sure that this book will appeal to reading groups per se unless they have a real interest in complex historical content. My view is that this book stands rather as a multifaceted personal read and more as one to be savoured slowly rather than read at full speed.