In conversation with Primula Bond... 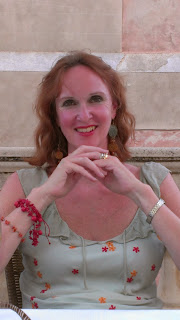 
Where did the original idea for the Unbreakable trilogy come from?

The original idea started with Serena, who, like the Berocca adverts, is me, but on a really good day. Then I closed my eyes and envisaged, in glorious detail, my ideal man firstly in pure looks and then in character and background. Gustav actually started out as a vampire and I have retained the dark, mysterious, wolfish air he has about him. While her past is not remotely like mine, Gustav's bad marriage is based on real life stories I have been told and have wanted to portray in fictional terms, because there really are evil women like Margot out there... The rest followed quite naturally, once they had come to life. The challenge lay in bringing those two characters together in glorious locations, giving them fascinating occupations and plenty of adventure, while keeping it real, ie exploring how two such different people could meet, ignite, overcome threats and sabotage, and (hopefully) live happily ever after.

The Golden Locket is the second book in the trilogy; did you feel more of an obligation to make this book even better than the first?

A really interesting question. I was pretty daunted at the idea of maintaining this story through three volumes, as I think some authors find they are spreading it pretty thin if they're not careful. At first I felt I'd given my all in The Silver Chain and just hoped that I could find enough to put into a second and third volume, let alone make them as good as the first. Also, at the time of writing The Golden Locket, I hadn't yet had the reaction of readers to The Silver Chain, so it was a bit like writing in the dark, or with ear muffs on – no idea how it would be received! But as the story progressed, and more characters and plot lines emerged, I found that, as with real life, there is always more to say. Obviously a writer's job is to condense that into a fictionalised world, so it will be stylised and manipulated to fit the parameters of your plan, but as an avid fan of mystery/thriller TV drama and film, I love the idea of cliffhangers, twists, and unexpected developments. If you leave each chapter/book on some kind of breathless moment, the next chapter/book becomes easier to start. If I'm honest I think that's why I enjoyed writing The Golden Locket and the third book more than writing The Silver Chain, because 'd already set up the main characters and situations, and now all I had to do was send them on their logical way. So, whisper it, but yes, I think The Golden Locket may be better! So what I'm hoping is that, while people really loved The Silver Chain, they will go wild about the sequels!

When writing your novels do you outline the plot first, or do you let the story go wherever it takes you?

A little bit of both. I do write a synopsis, broken down into chapters. I think a lot about it, and it helps me get over the dread of starting a new book, because I have given myself a framework to follow. Obviously then characters and plots will crop up which will deviate from the path, but at least I have some kind plan to keep me on the straight and narrow.

Location is obviously important to your story, how do you decide where in the world to take your characters?


After my first taste of travelling aged 18 (camping in Biarritz), I have loved it ever since. In fiction these locations add to the exoticism and luxury of the story, and is also relevant to the plot, but ultimately I weave that around places I have lived in myself, and/or travelled to. I have lived in London, Venice and Egypt (which I haven't written about this time, owing to current situation, but have shifted some of the action in Book 3 to Morocco instead), and I've visited all the other places such as New York, Paris etc more than once. It's a great excuse to revisit favourite areas, hotels, restaurants etc, pore over guidebooks, maps, etc, and go on the internet to check that I'm still up to date.

Can you give us any clues about what will happen in Book 3 of the trilogy?

We will find Serena and Gustav back in New York after the bumpy ride of The Golden Locket, more committed to each other than ever, but as well as trying to come to terms with what Pierre was trying to do in The Golden Locket, their greatest nemesis of all, his ex wife Margot, will also be sharpening her claws and clinging on for all she's worth, determined to wreck their hard-won happiness, so they both face and intense trauma as the story progresses towards its climax...


If The Golden Locket was optioned for a TV drama/ movie, who would you like to play Serena, Gustav and Pierre?

We can but dream! My ultimate fantasy would be sitting in a cinema with a vast box of Maltesers watching those opening credits! My instinct if a film were made would be to swerve the Hollywood hype, be groundbreaking and original, and go for gorgeous unknowns. But to give an idea, I've always had Olivier Martinez, the French actor, in my mind for Gustav, Josh Holloway from 'Lost', or Dominic Zamprogna (from 'General Hospital'). They must have silky dark hair, haunted, Slavic cheek bones, black eyes, and the constant hint of unshavenness. Amanda Seyfried would make a great a red-haired Serena. Pierre would have to be a thicker set, younger version of Gustav, the Puerto Recan actor Sharlim Ortiz perhaps if he put on a little muscle. Polly could be the Swedish actress MyAnna Burring who was in 'Twilight' and also 'Downton Abbey'. Salma Hayek, Diane Lane, Rachel Weicz or Demi Moore could be Margot, the evil but charismatic ex-wife. Tilda Swinton could be Crystal, the enigmatic housekeeper, but she might steal the show!

Primula ~ thank you so much for spending time with us . Jaffa and I wish you continuing success with your writing career and look forward to the third book in the Unbreakable trilogy.

**There is a special one day offer available through Amazon  where you can download a copy of The Silver Chain (Unbreakable #1) for free. *Available 21st November only - so hurry **

My thoughts on The Golden Locket

This second book in the Unbreakable Trilogy, finds Gustav and Serena in New York, where they remain enamoured of each other. However, Gustav's younger brother, Pierre is now firmly on the scene and seems determined to complicate Gustav and Serena's loved-up life.

There is a real sense of continuity in this second book, and it's great to see the relationship between Gustav and Serena become even stronger. It's also good to see Serena start to gain a little more personality, and as she becomes more self assured, she starts to gain in confidence and becomes more feisty and independent. I enjoyed the photography assignments, which take Serena into some bizarre situations, but she handles these with remarkable panache and quite enviable sexual confidence.

Overall, this is a good continuation of the story. There are some great moments with well described locations which take the action from the chic of New York, to the carnavale atmosphere of Venice. I am sure that fans of The Silver Chain will be delighted with The Golden Locket.