Alicia Berenson’s life is seemingly perfect. A famous painter married to an in-demand fashion photographer, she lives in a grand house with big windows overlooking a park in one of London’s most desirable areas. One evening her husband Gabriel returns home late from a fashion shoot, and Alicia shoots him five times in the face, and then never speaks another word.

Alicia’s refusal to talk, or give any kind of explanation, turns a domestic tragedy into something far grander, a mystery that captures the public imagination and casts Alicia into notoriety. The price of her art skyrockets, and she, the silent patient, is hidden away from the tabloids and spotlight at the Grove, a secure forensic unit in North London.

Theo Faber is a criminal psychotherapist who has waited a long time for the opportunity to work with Alicia. His determination to get her to talk and unravel the mystery of why she shot her husband takes him down a twisting path into his own motivations—a search for the truth that threatens to consume him...

There's been such an excited buzz around this book for the last few months that I was almost afraid to read it in case it didn't live up to expectations but from the moment I started The Silent Patient and came into contact with both Alicia Berenson, and her psychotherapist, Theo Fenton, I knew that I was reading something that was a little bit special.

There's a distinct creepiness to the story, and in light of Alicia's incarceration following her husband's death, for which she is held responsible, her silence is made all the more eloquent by her refusal to communicate on any level. Theo Fenton, takes employment at the secure psychiatric unit where Alicia is being held, and with a profound sense of bravado, Theo attempts to unravel the reasons for the silence of the silent patient. And, as we discover, over the length of the novel, there are so many valid reasons for Alicia's silence but the game is on to find out just who is telling the truth, as once the truth is out there, there is never going to be any way back.

For me, the novel works well because it's a cleverly layered dissection of a life which has been traumatised and shows just what happens when the brain tries to protect itself from catastrophic loss. And yet the story is also about so much more than a psychiatric analysis, it's about love, betrayal and obsession on a grand scale, and it's about those secrets and lies which are so huge they threaten to overwhelm everything.

There's so much about The Silent Patient which is better left unsaid, as that way the denouement will be every bit as shocking to you as it was for me. I usually have a good idea of where a thriller is heading, but I really didn't anticipate the ending, which blew me away. Some  books leave you feeling a little bit empty when they finish, but not so with this one which was absolutely unputdownable and which had me completely hooked from first page to last. 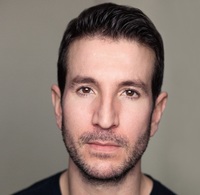 Alex Michaelides was born in Cyrprus in 1977. He wrote the film The Devil You Know and co-wrote The Brits are Coming. The Silent Patient is his first novel which he was inspired to write after doing a post-graduate course in psychotherapy and working part tine in a secure psychiatric unit for two years. The film of The  Silent patient is being developed by Brad Pitt's Plan B company. 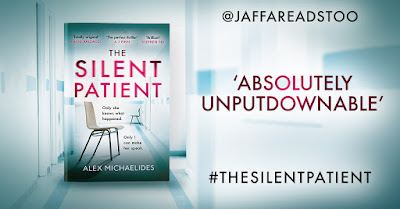